Youngpyong, South Korea (11 March 2016) – Para-alpine skier Corey Peters (New Plymouth) has picked up one final medal in his very successful northern hemisphere season before heading home to New Zealand on Saturday. The IPC Super-G World Cup Crystal Globe winner has spent the week competing in the Asia Cup at the venue for the PyeongChang 2018 Paralympic Games and won bronze in the Slalom yesterday.

“It’s nice to finish off the season with one last podium before heading home for some much needed R and R,” he says.  “The purpose of this trip to Korea was to have a look at the piste for the upcoming 2018 Paralympic Games. The hill is great; it has a good pitch to it. The snow was probably the iciest I've skied on so the next step now is to try and integrate similar conditions as much as possible in our build-up two years out from the games.” 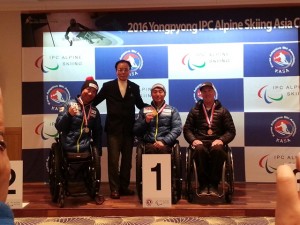