New Zealand Paralympian Carl Murphy (Wanaka) has won a bronze medal in his first World Para Snowboard Cup for 2018. Murphy was pleased with his result only 28 days out from the PyeongChang 2018 Paralympic Winter Games.

Murphy had completed the ideal build up the World Para Snowboard Cup in Big White, Canada with three weeks of intense training in great conditions.

The conditions were ideal for Murphy in the Men’s Para snowboard-cross event as the sun shone on the course that he knew well. The racing was extremely tight with the world’s top 16 riders competing including all Sochi 2014 Paralympic Winter Games medallists the American trio of Evan Strong, Michael Shea and Keith Gabel and the current World Champion Matti Suur-Hamari.

Murphy progressed well throughout the day beating Evan Strong (USA) in the Men’s Para snowboard-cross SB-LL2 quarter final. He was unfortunately unable to beat Alex Massie (Canada) in the semi-final. As the cloud came in during the afternoon Murphy rode off for bronze in the small final beating Keith Gabel (USA) to secure the bronze medal.

Murphy said, “I was pretty happy with how today went. This is only the third snowboard-cross event I have raced since my injury in 2016. We were aiming for a top six finish, so third is a solid result. To have my coach John Shelly alongside me was brilliant and his waxing was spot on. The key today was keeping to the plan and improving throughout the day.”

He continues, “I’m looking forward to continuing to build on today’s performance and progressing towards that gold medal in PyeongChang. However, I am under no illusion that the competition is going to be fierce.”

Carl Murphy will compete tomorrow in the Banked Slalom event at Big White, in Canada. 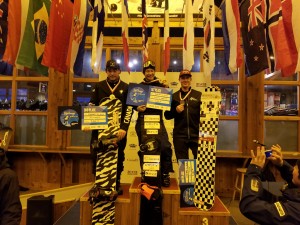