Today’s competition format included two heats with 33 riders in each. A rider’s final score was determined by the best of two runs. The top six riders from each heat plus the next three top qualifiers progressed to the semi-finals which are scheduled for tomorrow (Friday). The 15 qualified riders will be joined by 10 invited riders who progressed straight to semi-finals.

The Slopestyle course is composed of a wall-ride to start, with a choice of rails including a down-flat-down for the second feature, followed by a choice of cannon rail or rainbow rail before the three jumps.

Espen Bergh’s top scoring run in heat two started with an air over the top feature to disaster 270 on the down-flat-down rail. From there Bergh opted to hit the rainbow rail, pulling a blind 270 to right nine tail, switch left cork nose tail and finishing with a left side dub cork 12 mute.

Beau-James described the course as “really good fun despite cold and windy conditions.” He was pleased with his result and enjoyed competing in front of a home crowd. The North Face® Freeski Open is renowned for combining a relaxed, sociable atmosphere with world-class competition. “Competing with your friends is always fun,” remarked Beau-James Wells.

Classified as a silver level event by the AFP (Association of Freeskiing Professionals) World Tour, The North Face® Freeski Open has, once again, attracted some of the world’s best athletes, many of whom have their sights on podium results at the Winter Olympic Games in Sochi, Russia in 2014. While The North Face® Freeski Open is not a FIS points earner and will not count towards Olympic qualification, riders will treat it as an important training opportunity whilst earning valuable AFP points.

Results from the Men’s Slopestyle Qualifiers Heat One are available here.

Videos will be available to view throughout the competition at the following link: http://vimeo.com/thenorthfaceaunz 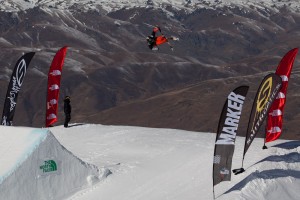 9 years ago
The North Face Freeski Open of NZ, slopestyle