Lake Wanaka, New Zealand (26 August 2017) - The first of the Audi quattro Winter Games NZ World Cups got underway at Cardrona Alpine Resort near Wanaka today with qualifying rounds of the freeski slopestyle. Henrik Harlaut (SWE), Andri Ragettli (SUI), James Woods (GBR) and Alex Beaulieu-Marchand (CAN) were the top qualifiers across the four heats for the 74-strong men’s field, while Kelly Sildaru (EST) was the top qualifier from the 32 female competitors, who competed in one heat.

With just over five months to go until the 2018 Olympic Winter Games in South Korea and valuable qualifying points up for grabs, the men’s and women’s start lists featured many of the sport’s biggest names while the creative course provided plenty of opportunity to showcase some of their most awe-inspiring tricks.

Sweden’s Henrik Harlaut was leaving nothing to chance, the seven-time Winter X- Games medallist scoring 90.33 points from a possible 100 right off the bat in heat one. The judges were impressed by his unique backslide switch up to backslide on the rainbow rail at the top of the course and rewarded him for excellent grabs on all the jumps and an all-round stylish run.

2017 Freeski Slopestyle World Champ McRae Williams (USA) was close on the Swede’s tail, landing two solid runs for a top score of 85.33 and second place in heat one.

“I just tried to keep it a bit mellower for qualifiers and save the big tricks for finals,” said Williams.

Switzerland’s Andri Ragettli also came out all guns firing in heat two. The 2016 FIS World Cup Crystal Globe winner ticked all the boxes for amplitude, spinning on different axis and using a variety of grabs, stomping his first run of two for a score of 93.33.

James ‘Woodsy’ Woods – flying the flag for GB but just about a Cardrona-local – put a niggly hip injury to the back of his mind and laid down a big, clean and well-executed run for the top score (92.66) in heat three and a spot in the finals.

“It’s my first time back skiing for quite a long time and it’s awesome,” said Woodsy. “I was really gunning to get back for this event. Cardrona feels like home.”

A first run score of 87.33 had NZ’s Finn Bilous in fourth place after the first run and right on the bubble to make the cut for finals with team mate Jackson Wells just outside in fifth place on 83.66. However, Evan McEachran made an impressive recovery from a crash on run one to jump from 14th place to third and nudge the Kiwi out of finals contention.

Alex Beaulieu-Marchand also suffered a crash on his first run and was unsure whether he would make it back to the start gate for a second chance at qualifying. Somewhat remarkably he not only made it through a second run but was able to throw down some of the most progressive tricks of the day and land the top score in heat four.

“I didn’t know if I was going to be able to do my second run, but I got cleared by the medical team and I’m just happy to get my run down,” he said.

All eyes were on 15-year-old Kelly Sildaru to push the level of competition in the women’s field and she didn’t disappoint. The two-time Winter X-Games gold medallist kept suspense levels high, saving her best performance for last and taking her whole rail section to a next level of difficulty and nailing the jump line with a switch left 1080 on the final hit.

“The first run didn’t go so well, I over-rotated on the first jump,” she explained. “I landed the second run and the second and third rails were probably my favourite. It can always be better but I’m pretty happy.”

Switzerland’s Giulia Tanno was pleasantly surprised to find herself qualifying to finals in second place with today’s competition one of her first since sustaining an injury in April.  Canada’s Dara Howell was “so happy” to make finals in third place after reverting on a rail on run one but deciding to “be aggressive” on the second run and reaping the rewards. Junior World Champs silver medallist Jennie-Lee Burmansson (SWE) stood out to the judges with her style and signalled that she is ready to take on the sport’s top women by qualifying to finals in fourth place.

The top eight female competitors and 16 men (top four from each heat) will compete in the freeski slopestyle finals at Cardrona Alpine Resort tomorrow (Sunday 27 August).

Down rail: right side 450 to switch

Rainbow rail: switch on, back 4 off

Down rail: switch right 4 to continuing 2

Up flat down rail – backside 360 switch up

Gap to down rail: left side 450 to switch 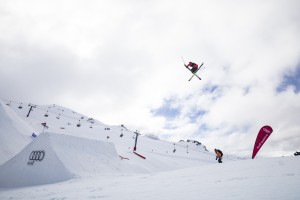