New Zealand freeskier Ben Barclay (19 years old) has finished in 7th place at the FIS Freeski Big Air World Cup held in Steamboat, Colorado this morning (NZT). This is Ben’s best result at a FIS World Cup in any discipline.

“Honestly it hasn’t really hit me, I came into this event thinking it wasn’t my stronger discipline and being a really high-level event, I was aiming for a top thirty to score some points, I didn’t even fathom that this could happen, I am absolutely stoked!”

Ben meant business dropping in for run one, attempting a technical switch left double cork 1800, but unfortunately he just couldn’t quite stick the landing on the 65-foot jump.

Ben got redemption in run two, reattempting and stomping his switch left double cork 1800 with a mute grab, impressing the judges and being awarded with an 88.75, bumping him into 8th position.

With one final opportunity to get some points on the board Ben dropped into his third and final run, throwing a huge left double cork 1440 tail grab and was rewarded with a score of 80.25, resulting in a combined score of 169.00, slotting into 7th position overall. 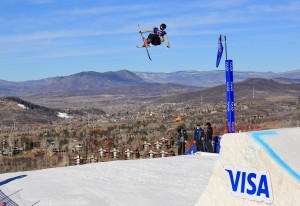