Top New Zealand freeskier Beau-James Wells is making the transition from competitive skiing into the world of freeski filming.

Beau-James explains that “after 11 years of skiing halfpipe competitively, I’m really pumped to be moving into filming.”

For the two-time Winter Olympian (Sochi 2014 and PyeongChang 2018) this is an exciting opportunity to follow his passion and continue to inspire outside of the competition environment.

Beau-James has been a strong force on the international competition circuit, representing New Zealand with pride and style at the most prestigious global freeski events since he was just 15 years old. As the third of the four Wells brothers, a surname synonymous with success in the freeski world, Beau-James grew up living and breathing skiing.

Beau-James was flagbearer for Team NZ at the 2018 PyeongChang Olympic Winter Games and alongside his impressive and extensive success in competitive freeskiing, Beau-James has inspired and lead the freeski community both in New Zealand and internationally.

“The mark of a true champion is their ability to ‘call time’ on their own terms and to do so when they are at the top of their game. As our most successful winter freeski Olympian (over multiple Olympic Winter Games) Beau-James has done just that.” Nic Cavanagh, Snow Sports NZ CEO and High Performance Director. “Beau-James, go well and I look forward to being inspired by your big screen productions and social media edits in the future!”

Cavanagh further explains that as artfully as he has inspired on snow with his creativity and progression, Beau-James has also lead the development of the ‘athlete voice’ at Snow Sports NZ as the inaugural chair of the Senior Athlete Leadership Team (SALT), with leadership and management prose that would be not out of place in many boardrooms around New Zealand.

Going further than just Snow Sports NZ, Beau-James has extended his leadership and advocacy by being an athlete representative on the NZOC Athletes commission advocating for athlete voice for New Zealand athletes. He is also an NZOC Olympic Ambassador, visiting schools throughout New Zealand to talk about the Olympics and inspire young Kiwi kids.

As Beau-James reflects on his competitive freeskiing career and looks forward to his freeski filming career he would like to share the following message and acknowledgements:

“I would like to thank all the staff at Snow Sports NZ, High Performance Sport NZ, and the NZOC for the support over the last 11 years. I had a great time working with you all. Thank you to my Dad/Coach, Mum and brothers for everything you have done me. My Fiancée Liberty, thank you for your love and support. Thank you to Shane Crowhen (Strength and Conditioning) and Dr Mark Clatworthy for fixing me and keeping my body strong. A special thank you to my sponsors Monster Energy, Oakley, Atomic, Oyuki, and Cardrona Alpine Resort for your continual support, without you it simply wouldn’t be possible.

Beau-James is excited to be moving into freeski filming; “I have a lot more fun when I’m skiing for a video or film, and I can be more creative. I’ll be skiing in the backcountry a lot more too, and building jumps out there while still skiing in the park and pipe.”

So what’s next for Beau-James Wells?

“The plan for the rest of the winter is to film as much as possible while we still have snow. I’m also getting married in November which is really exciting, then I’ll head over to the States with my brother to film for the winter season over there.”

“We wish Beau all the very best as he transitions his career towards a focus on filming inspirational movie parts and continuing his relationship with us as a Snow Sports NZ ambassador.” Said Tom Willmott, a sentiment shared by all of Snow Sports New Zealand. 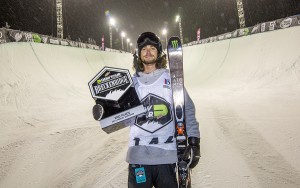