Park City, Utah (2 February 2013) – Competing against some of his childhood idols, seventeen year old Beau-James Wells put together “the run of his life” today to place 10th in the finals of the Sprint U.S. Grand Prix halfpipe freeskiing competition in Park City, Utah.

As a combination International Ski Federation (FIS) Freestyle World Cup and Association of Freeskiing Professionals (AFP) Platinum level contest the competition attracted a high class field. X Games champions David Wise and Maddie Bowman, both of the US, were the top place getters in the men’s and women’s finals which saw amazing runs with high scores.

Beau-James Wells put together an impressive performance in Thursday’s qualifying rounds earning himself the 12th and last finals spot; today he pushed even further. Key to Wells’ top ten finish was the right double 900, a trick which he has only recently brought into his repertoire but until today had not landed in competition. After a crash on his first run Wells was unsure whether the second run would be the time to try out the new trick.

“I was just focussing on the whole run. If I’d just concentrated on that one trick I would have forgotten everything else,” he recounts. As it was, the second run went to plan, Wells showing consistently high amplitude which allowed him to successfully land the double.

Wells’ 10th place finish is his best result at the elite level and he admits to being “pretty happy” with it. At seventeen years old he finds it “kind of crazy” to be competing against skiers he has grown up watching and admiring; Simon Dumont (USA) and Canada’s Mike Riddle are two of the big names he mentions. Dumont placed eighth and Riddle sixth in today’s competition.

The New Zealand Park & Pipe team have a packed schedule ahead of them. Next on the agenda is the Freeski Slopestyle World Cup in Switzerland followed by a FIS World Cup test event in the Olympic halfpipe in Sochi, Russia. 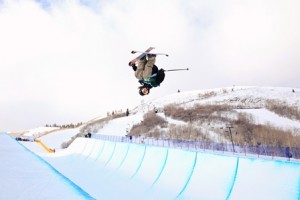