Beau-James Wells Through to Slopestyle Finals in Norway

Voss, Norway (9 March 2013) - It was a beautiful sunny day in Voss, Norway for the FIS Freestyle World Championships Slopestyle qualifying.  Beau-James Wells loves to ski.  After a 13th place finish in Oslo just afew days ago in the halfpipe, he took to the challenging Slopestyle course intent on landing his run with some nasty shin-bang suffered by over-shooting the first jump in training.

A bit of an early exit on the second rail feature on run one saw him post a score of 64.2.  Sitting out of contention it was time to step it up on run two.  Gritting his teeth and opting to ‘block out the pain’, Beau dropped into his second run with confidence beyond his years.  Slick execution, excellent landings and his switch right 7, switch double-cork 9 and left 900 combo over the jumps saw him improve his score by 10 points and claim the sixth spot in his heat and progress to finals.  This is Beau’s first major event final in Slopestyle and is a relief for him to avoid any chance of being labelled a pipe-jock!  In fact Beau is currently ranked fourth overall on the AFP World tour Rankings proving his prowess in both disciplines.

Beau will be competing in finals tomorrow which follows the ladies' qualifying where Anna Willcox is also set to compete. 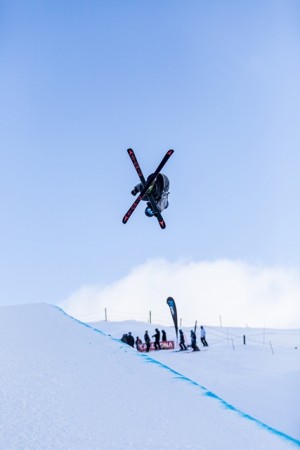