The snow rolled in just in time for the event, slowing competitors’ speed and making for tougher than expected conditions. However, with a strong practice session under his belt and memories of his 2014 World Championship win still fresh in his mind, Wells’ first run proved to be the gold medal winning effort and his score of 90.80 could not be touched by any of his fellow competitors.

At 18ft, the Valmalenco halfpipe is smaller than the (22ft) halfpipe the New Zealand team are accustomed to training and competing in at their home resort of Cardrona as well as at their northern hemisphere base of Breckenridge. Wells adapted with apparent ease, laying down good technical tricks and finding the amplitude he needed in spite of the slow conditions.

“I’m very happy,” commented Wells, who also won a silver medal in Slopestyle on Saturday. “It’s a good way to finish.” At 19 years old, this will be his final year of competition at junior level.

Jake Mageau (USA) scored an 82.80, also on his first run of the day, to take the silver medal, while Birk Irving (USA) snuck onto the podium thanks to his strong showing on his final run.

While Bilous was pleased with his result, Porteous said he had “mixed feelings” having landed all of his high level tricks over the course of the three runs but not being able to land one complete run. At 15 years old, both athletes can look forward to building on their experience.

Jackson Wells was unable to compete in the halfpipe competition following an injury sustained in yesterday’s practice session. 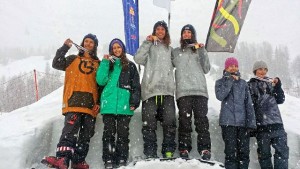