Valmalenco, Italy- (30 March 2014) – Beau-James Wells has won the Freeski Halfpipe Junior World Championships in Valmalenco, Italy. Beau qualified in first placed yesterday with a score of 86.2, but with his nearest rival Joel Gisler from Switzerland hot on his heels scoring 85.00, Beau knew he would have to lift his performance in finals to seal the deal.

He did just that by landing an exceptional right double 900 on the second hit of a smooth and lofty first run to score 94.2 to best Joel Gisler who scored 90.8 on his first run, and Kalle Hilden who finished third with a score of 84.2. Beau knew he had won prior to dropping in for his second run, but went even bigger and better anyway.

“The halfpipe was so fun to ski, and it was good to see some younger skiers coming through,” commented Beau. “I am stoked to win the Junior World Champion title; it is one of my best competition results.”

Beau-James will now set his sights on the World Championships in Whistler in April.

Team-mate Finn Bilous put in another outstanding performance in the pipe landing a right 1080 for the first time in competition in his first run to score 75.00. He scored 77.8 in his second run by adding a left 720 to finish the day in fifth place. Miguel Porteous focussed on amplitude to improve in his second run, scoring 72.4 for impressive back-to-back flairs and finishing in seventh. Jackson Wells was unable to complete a clean run in finals and finished in 11th position.

Freeski coach Bruce Wells on the NZ skiers’ performance: “It was impressive to see the team adapt to a pipe that was smaller than what they are used to skiing.  The quality of tricks improved each and every training session and we have enjoyed the challenge and watching the progression. Beau had to get brave and throw some of his gnarlier tricks for the win – we’re proud of another strong performance in the pipe.”

Over to the Snowboard Slopestyle and Carlos Garcia-Knight hung on to eighth position of a 16-man semi-final to join the top eight from qualifying. Teammate JJ Rayward who had the 11th highest scoring run of qualifying was unable to repeat in semis and went down with a nasty bail in run one, eventually finishing in 24th position in the strong field of 60 international riders.

Finals time and Carlos was first to drop. His first run didn’t quite go to plan, but he held his composure to land a frontside 720 instead of a 1080, scoring a 70.5 to put him in contention in the top half of the finals field.  All eyes were on Lyon Farrell who qualified in first place yesterday and had been nailing his runs in training.  Too much speed into the first jump and Lyon crashed out creating some tension and excitement at the top of the course.

Second run and Carlos nailed his goal, landing an excellent switch backside 900 to frontside 1080 combo and improved his score to an 80.25 to finish in seventh.

NZ’s Lyon Farrell was the last rider of the day to drop to the course. Under pressure he landed the run he wanted to including a tweaked cab 900 to backside double cork 1080 combo on the jumps. A slight early departure on the first rail and a back foot landing on his second jump was enough to miss the podium, Lyon finishing in fourth place.

The event was won by Michael Schaerer from Switzerland with Rowan Coultas from Great Britain in second and Stian Kleivdal from Norway in third.

Junior Worlds Head Coach Peter Legnavsky on the team performance: “It has been an excellent day for Snow Sports NZ with some fantastic performances across the board.  It was great to see Beau claim New Zealand’s first Junior World Championship title and for some new talent to demonstrate their skills in international competition. We are excited about the potential of these youngsters and to see what they can achieve in the next few years.”

Next up on the Kiwis’ World Champs schedule are the Freeski Slopestyle and Snowboard Cross on Wednesday 2 April. 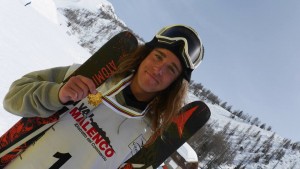