Breckenridge, USA (12 December 2015) - Cardrona NZ freeskier Beau-James Wells (Wanaka) has achieved a career-best result finishing second in men's superpipe at the Dew Tour in Breckenridge, USA. Byron Wells, who has been off snow recovering from injury since April this year, finished in 5th place.

The Dew Tour has seen strong results all round from the Cardrona NZ Park & Pipe team.Janina Kuzma finished fourth in women's superpipe yesterday. Oldest Wells brother Jossi will compete in the men's slopestyle finals tomorrow having qualified in second place earlier in the week.

A foot of fresh snow overnight made for a tough practice session and the 12-strong field of finalists would have their work cut out to gain the speed and amplitude required to perform their most technical tricks in competition. Seemingly undeterred by the weather conditions Beau had the pipe dialled in right from the start, laying down a switch left 7 tail to right dub 12, left 9, right 9 and finishing with a left dub 12 safety. His first run score of 88.60 had him in the lead after the first run.

"I knew there were four or five really good riders coming after me so I definitely wasn't feeling confident at that point," explains Beau. "I talked to my coach to figure out what I could do to up my score on the second run and we decided to change the fourth hit to a right dub 9."

The strategy worked, Beau going even bigger on the second run and including three doubles for the first time ina  competition run. The judges were suitably impressed and scored him 90.40.

Meanwhile Byron Wells came back from a crash in his first run to put down a stylish second run for a score of 84.40 which would initially have him sitting in third place until Alex Ferreira (USA) came through with a score of 88.60 to push Byron to fourth.

Top qualifier and Olympic gold medallist David Wise (USA) was the last skier to drop and Beau-James had a nervous wait to see if he could hold on to first place. The score came in at 91.60 pushing the Kiwi into second place but nevertheless delighted by his result.

"It's my first Dew Tour podium and this is the best feeling ever," said Beau-James after the competition. 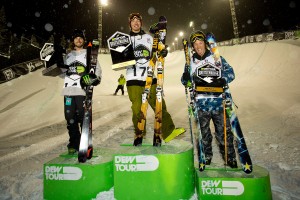