Zoi Sadowski-Synnott joined an elite group of multiple winners of the ASB Supreme Award joining Danyon Loader (4-time-winner), Greg Henderson (5), Carl Hayman (2), Hamish Bond (5) and Brendon McCullum (2). Last year Zoi joined Tanya Murray and Alison Shanks as the third woman to win the overall award but is the first woman to have won the award more than once, over the awards evening’s 30 years.

Tim Cafe won the Otago Community Trust Coach of the Year award. Tim is a past Olympic Alpine ski racer himself, but he is best known now for his work with Alpine ski racer, Alice Robinson.

The Dunedin Technical AFC Woman’s team won the Otago Daily Times Team of the Year category for the first time in their history. Conquering all opposition, the Dunedin Technical side beat the winners of the Mainland and Capital football leagues before defeating the Northern Champions to take out the Kate Sheppard Cup 4-2 in an amazing final in Auckland.

It was a rising star in rugby and sevens winning the PKF Junior Sportsman of the Year award.  Vilimoni Koroi had a year he won’t forget ,winning a Commonwealth Games gold with the NZ Sevens team and then lifting the ‘Log of Wood’ off Waikato for the Otago Mitre 10 Cup team.

Ben Smith took away the Speights Sportsman of the year repeating his win of this award in 2016.  Maybe Otago’s best All Black of all time had another stellar year playing all bar one All Black test over the judging period, the vice-captain of the All Blacks is a true leader amongst men and we wish him all the best for the upcoming World Cup in Japan.

The Mercy Hospital Junior Sportswoman was taken home by alpine skier, Alice Robinson. The Queenstown native wrote herself a page in snow sports history when she won a stunning silver medal at a World Cup event. Not only a champion now, but one to keep an eye on in the future.

It was third time lucky for Jono Bredin in the NZCT Official of the Year award.  After being a finalist for the past two years, umpiring the final of the netball at the Commonwealth Games got him over the line. Now retired from the sport we look forward to watching his progress in the slightly different code of Rugby.

Peter Becker was honoured with the Otago Polytechnic Services to Sport award. The Becker name is synonymous with curling in NZ and the amount of coaching, managing and governance contributed by Peter is many lifetime’s of work for the normal person. Peter was stunned to receive the award as his family had told him the evening out was a birthday present to come down from Ranfurly.. A humble man who could not deserve the award more.

Igtimi won the University of Otago Innovation in Sport award. Founded in 2008, Igtimi's core business is working with sports organisations and the entertainment industry to improve the visibility of water sports.  For the past 11 years, the team at Igtimi have worked on innovative bespoke GPS hardware and cloud based real-time software. Under the YachtBot brand, Igtimi helps coaches and sports scientists boost their athletes’ performance and keeps spectators involved when watching live events. Igtimi's solutions are used by local company, Animation Research Limited, for tracking high profile sporting events like the Volvo Ocean Race and the TP52 Super Series and by enabling them to accurately position golf balls for their 3D graphics package at international golfing events. Recently Igtimi began working as part of the broadcast team developing the race management software for the next Americas Cup and World Series.

“Congratulations to all of this year’s ASB Otago Sports Awards finalists and winners,” ASB South Island Regional Manager Martin Gay said. “It’s fantastic to see so many of Otago’s incredible sports people honoured at this event, and it’s a privilege to be involved in recognising their progress and success on both a local and international stage. Special congratulations to Zoi Sadowski-Synnott for collecting the ASB Otago Supreme Award for the second year in a row, and to all of the night’s winners.”

Sport Otago Chief Executive, John Brimble comments, “Once again the ASB Otago Sports Awards showcases and demonstrates the exceptional talent that we produce within Otago. This talent pool is across the broad spectrum and reflects the love and involvement of Otago youth in sport recreation and physical activity. Because of our isolation and long distances, our sportspeople have to travel,along with the conditions and environment we are used to training and competing in; we breed resilience and mental toughness. No surprise that with one of the highest levels of participation in sport and recreation within New Zealand that we have so many outstanding athletes that contribute on the national and international stage. The awards provide us with the opportunity to reflect, recognise and celebrate their achievements.” 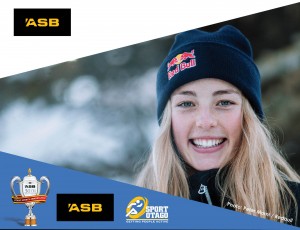