The day began with snowboarders taking on the Slopestyle and skiers the Giant Slalom.

Competitors had just one run to impress the judges on the five feature slopestyle course. First time competitor Lauren Petch (Kristin School) overcame the nerves which almost saw her opt out of the event, topping the girls’ snowboard field with a score of 50 from a possible 100. Brieanna Harden (Rangitoto College) placed second on 44 and Holly Du Plessis (Macleans College) third on 37.

Liam Whiley (Kristin School), who began his snowboarding career at Snowplanet and has been a familiar face on the podium at these Championships for several years, dominated the boys’ snowboard slopestyle competition. He impressed the judges with his flowing run and good combination of tricks. Liam’s score of 83 put him ahead of Albany Junior High’s Lachlan Blackmore on 75 with another Kristin School competitor Mitchell Davern only one point behind on 74 for third place.

“This is always a fun event and a good way to start the season,” says Liam.

Placings were awarded on a racer’s combined time over two runs. Eve’s time of 27.37s put her just ahead of Hazel Wells (Diocesan School) in 27.73s and Laura Jackson (Kristin School) in 27.89s. The boys’ field also saw a tight finish with Oscar coming out just ahead on 26.73s, beating Josh Reilly (Westlake Boys) on 27.06s and Will Cashmore, also of Kings College, in 27.44s.

Skiers and snowboarders then swapped courses for the second half of the day’s proceedings.

Fastest over the girls’ snowboard GS course was another first time competitor, Clara Brown of Macleans College who took out top place in her combined time of 39.75s. Surprised by her own success, she said her expectations were “not this good” and in hindsight wished she’d also contested the slopestyle event.

Olivia Koller (Takapuna Grammar) claimed second place in a time of 40.84s with Sophie Nicholas (Northcote Grammar) rounding out the podium in third place on 42.60s.

In the early stages of what she hopes will become a successful competitive career, Lauren Wotton (Selwyn College) was the winner of today’s girls’ Ski Slopestyle event. Sticking to a well-practiced run, she looked confident on course. Only her second ever competition, she commented afterwards that while she had been hopeful of a podium placing she had not expected to take out first place.

Lauren’s score of 74 put her ahead of Kristin School’s Gia Hughes on 60 and Sophia Furness (Saint Kentigern College) on 59 for third place.

The field of 27 competitors was the largest ever to compete in girls’ Ski Slopestyle at the Auckland Secondary School Champs and this growth in numbers bodes well for the sport.

Boys’ Snowboard GS saw another large field and a familiar look to the podium. Liam Whiley was the fastest of the 50 competitors, topping the scoreboard in a combined time of 33.75s. Toby Murray (Northcote College) posted a fast time of 34.12s for second place while Lachlan Blackmore stepped up to the podium for his second time today, taking third place with his time of 34.57.

Oliver Kelsey (Westlake Boys) was another competitor to impress judges, starting out with a switch rodeo off the jump at the top of the course and making it look easy the rest of the way down. Oliver took out first place in boys’ Ski Slopestyle with a score of 68. Michael Coutts (Wentworth College) finished second on 65 points, with Sam Clezy (Sacred Heart College) third on 56 points. 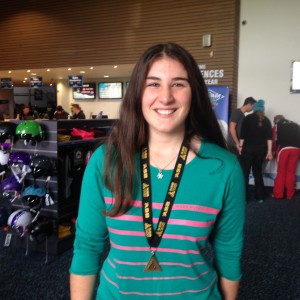