Today’s competition is the first in the Verbier Freeride Week series which comprises three 2-star and one 3-star FWQ level events.

Speaking after the event Anna commented, “I was really happy to win my first ever FWQ event. Conditions were pretty variable today with snow similar to New Zealand. I'm psyched for the rest of the week!”

A lack of snowfall in the region made for a rocky course and conditions got the better of fellow New Zealand competitor Mick Norrie.

“I was happy with my line choice and how I skied but ended up unfortunately losing a ski to a rock giving me a no score,” explained Mike.

The FWQ Tour consists of a series of events with different point values from 1-star to 4-star. The 2014 season started 16 May 2013 and will end 22 April 2014. The Tour is split by regions with Region 1 encompassing Europe and Australasia and Region 2 encompassing the Americas. The 2014 FWQ ranking will take the three best results of each rider during the 2013/2014 season. The top three Ski Men and two Snowboard Men from each region will qualify for the prestigious Freeride World Tour (FWT). The top two Ski Women and one Snowboard Woman from each region will qualify for the FWT.

Anna Smoothy’s brother Sam is one of four New Zealanders who has qualified for the 2014 Freeride World Tour, along with New Zealand skiers Charlie Lyons and Neil Williman and snowboarder Ruari Macfarlane. The next stop on the Freeride World Tour is scheduled to be Courmayeur, Italy on 18 January. 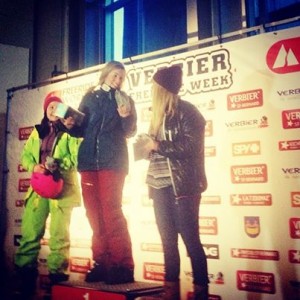