“This is a tough hill and many of the athletes in the high calibre field have scored some excellent results which will count towards their quest for Olympic qualification for Sochi,” he said.

Competition was extremely tight in the fight for the men’s title with just 8/100ths of a second separating Chodounsky, 29, and second placed Akira Sasaki, 31, of Japan, hotly followed by Adam Zampa, 22, of Slovakia who won the men’s ANC giant slalom title yesterday (August 20).

Chodounsky, ranked 25 in slalom, had the fastest first run in 44.19 but was pipped by Sasaki in the second when he blitzed the field to finish in an unbeatable 40.15. Chodounsky clocked a combined time of 1.25.24 to Akira’s 1.25.32 and Zampa’s 1.25.61 in a spectacular finish between the top ranked seeds.

Chodounsky was upbeat about his win after two recent wins in Australia: “It’s proving to be a great summer, I am on a roll. The first run got quite rough but the second held up well and although I made a little mistake I am pleased with the result.”

Akira who is 35th in the world was also pleased with his result: “My coach set the second course which was helpful for me. The Winter Games has been very important for me because I want to qualify for Sochi.”

Zampa is ranked 37th in the world and with slalom as his favourite discipline would have preferred to be higher on the podium. He was lying second after the first run but “braked a bit much in the second run” which put him into third.

American Will Brandenburg, vying for a top three placing after finishing third in the first run, straddled a gate in the second run putting him out of contention.

New Zealand representative Adam Barwood, 21, was first Kiwi in 21st place in 1.29.05.making a 33 point result which will lower his world ranking.

Moltzan is ranked 144 in the world and training in New Zealand as member of the US Europa Cup tech team. She was overwhelmed by her win which was the first ever title at ANC level. “The second run was very bumpy but I just kept going and this is a very exciting result in my career.”

For Gisin, ranked 41 in the world, it was the first time she has competed in summer. “It was a great race and it is very cool to be here. I want to thank Winter Games and all the volunteers. We had such difficult conditions and a very good result,” she said.

McJames, who skis with the independent US Team Groundswell, is ranked 92nd in slalom and was excited about her fast second run which provided her with the bronze medal: “Now I just have to put two good runs together and I will get a good result.”

The Audi quattro Winter Games NZ 2013 continues tomorrow (Thursday) with the first of two IPC Alpine Slalom World Cups at Coronet Peak, qualifying rounds for the FIS Snowboard Halfpipe World Cup at Cardrona and further round-robin matches in the men’s fours and mixed doubles at Winter Games NZ's elite curling tournament in Naseby. The Downtown Sessions festival continues with the first race of the Winter Games NZ cyclocross series in Wanaka, the Adventure Film Festival presented by Auckland Airport at Reading Cinema, Queenstown and Cinema Paradiso, Wanaka plus entertainment and live music at the Lotto Villages in both towns. 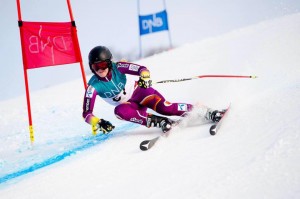