The camp was funded by The Snowvision Foundation, a Charitable Trust which supports New Zealanders on snow.

“We were blessed with fantastic weather and firm snow for all three days which meant the athletes could really make the most of their time with Chris,” explains Hannah.

New Zealand-born Chris Knight has worked with the US world cup team for 13 years and has coached some of the world’s best female ski racers including Olympic gold medallists Lindsey Vonn and Julia Mancuso.

“Chris is fantastic, he’s so motivating and great with his feedback,” says camp participant Alex Hull of Queenstown Alpine Ski Team (QAST). “He makes everything really clear and he’s able to really connect with each of us.

“The camp was so inspirational, I learned so much. It was a three day slalom block and the key focus was on ankles and knees which really helped my slalom (skiing). We had race simulations on day three which showed us how thoroughly we need to do every race inspection.”

As well as receiving on-snow training, the camp participants underwent movement screening with physiotherapists Ginny Rutledge and Hamish Dickie. The purpose of the screening programme is to identify poor movement patterns which could lead to injury and to provide exercise intervention to minimise this risk.

Camp participants will now receive individual evaluations to assist with their ongoing development and further improvement.

Snow Sports NZ would like to thank Fiona Stevens of Snowvision for her continued support of the Junior Development Camps, Ginny Rutledge and Hamish Dickie for taking the athletes through their movement screening, and QAST coaches, Tim Café, Angus Rose and Mats Boehnke who assisted Chris Knight over the three days. We are also grateful to Coronet Peak for providing a great space on the hill and superb grooming.

Will Cashmore Stockman Sports U16 M 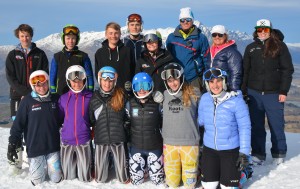