Lake Wanaka, New Zealand (13 October 2016) –The Snow Sports NZ Alpine Youth Development Camp funded by the Snowvision Foundation took place in Wanaka from 10-11 October 2016. The camp was open to U14 and U16 ski racers and selection to attend was based on national points and results throughout the season.

On day two, Ron Kipp gave a presentation about deliberate practice, outlining for the athletes the difference between good and excellent in training and competition. Ron was formerly the Coaches Education Manager for USSA and has travelled to New Zealand twice this season to run Coach Development clinics.

Ben Griffin ran a second session on agility and coordination, giving the athletes dry land training exercises which can be practised year round. The camp wrapped up with a motivational talk given by Snow Sports NZ High Performance Director Ashley light, encouraging the athletes to focus in on their love of their sport.

“It’s exciting to see NZ's rising alpine stars have the opportunity to be mentored on all aspects of their sport by such experienced coaches and athletes as Nils Coberger and Ben Griffin” she said.

The camp attendees were excited to share their learning experiences:

Jini Lee: “I learnt how to set a goal and get motivated to be a good ski racer, which has been one of my dreams so far, through this programme. What I enjoyed most was the physical training with the importance of a proper warm-up. Before, I didn’t know how much I exercise to do in order to improve my physical ability.  Despite not having on-snow training due to bad snow conditions, it was an amazing opportunity to help me realise my dream. Thank you so much.”

Cameron Marshall: "I really enjoyed the opportunity to listen and learn from NZ’s best. I enjoyed learning more about what motivates and drives me to be a better athlete, how important it is to practise and prepare, I have also learned a new set of warm up drills and protocols to use.  I would like to thank Snowvision Foundation and Snow Sports for giving me the opportunity to attend this camp.”

Will Cashmore: “What I liked about the camp was that everyone who is usually considered as your ‘competition’ gathered and talked about different aspects of ski racing. The camp was original as minimal technique was talked and focus was more around preparation and how to be mentally ready to ski fast.”

Nikau Whetu: "I thought it was really cool to train amongst New Zealand's top skiers and to be shown warm up exercises by NZ's elite; Willis and Adam. It was really fun when we individually set our own agility courses and then ran through them. It was a great eye opener to listen to the motivational talks and the talk by Ron."

About The Snowvision Foundation

The Snowvision Foundation is a registered charitable trust (no. 1613037) established in 2005 to help build a new future for New Zealanders involved in winter alpine activities, particularly supporting and resourcing snow sport development and training programmes. 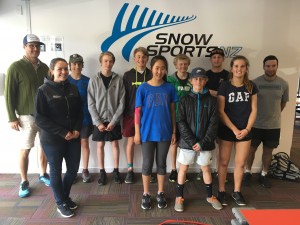