Ben Harrington (Wanaka), competing in the male Intermediate 7-8 category, summed up the standard of competition in the big park: “The level is insane. Heaps of people are throwing back to back 7s (two full rotations) and the rail sections are really creative. Everyone is having a good time but at the same time still trying to put down their best run, and that’s always the vibe here at Junior Nationals.”

As it turned out, his was the most hotly contested category with local skiers going head to head against a strong contingent from the North Island. Wellington’s Fraser McClellan came away with the top score, putting down a confident run with solid grabs and a tidy rail section despite the challenge of soft snow, a head wind and his small size which meant his friends had to sling shot him out of the start gate to ensure he got enough speed to hit the first jump.

Felix Klein, formerly of Wanaka now resident in the UK, owned the male 11-13 Secondary division, winning by a clear 20 points.  He landed back to back switch 7s with the best grabs of the day.

Ski racer Ben Richards, who dominated yesterday’s GS and Ski Cross events, unveiled a whole new skill set with a technical run incorporating a left 540 tail grab to switch left 540 safety, to left cork 720 before hitting the rainbow rail with a 270 out. Not enough for a podium in the male Intermediate years 11-13 but a few more points in the bag to count towards his overall placing.

While there were only a handful of female competitors in the older age categories, they certainly had the skills to impress the judges. Abi Harrigan from Australia had an amazing run and won the Secondary 9-10. Gia Hughes (Wellington) and Maggie Little (Wanaka) battled for the win in the female Intermediate 11-13 age group, Gia throwing down a switch 540 and Maggie spinning both left and right on the jumps and attacking the rails with confidence. The win went to Maggie with 83 points to Gia’s 78.67.

“It’s been a really good day,” said Maggie. “My plan was to keep things smooth and consistent and spinning both ways is something I’ve been building up to all season so I’m really pleased with my result.”

Meanwhile, the younger competitors were throwing down some impressive tricks of their own and the judges had a hard time separating out the top scorers. However, one competitor who did stand out as a clear winner was Logan Millar (Wanaka). One of the youngest on course, in the male Primary Year 1-2, Logan would not have looked out of place taking on some of the older skiers. His run incorporated a left 360, left 540, and a 360 on the rail. Logan is on a winning streak with two runs already to his name in yesterday’s GS and Ski Cross.

Auckland’s Fletcher McArthur and Australia’s Oskar Schulz had the highest scoring runs of the day, taking respective wins in the Primary Year 3-4 and 5-6 age groups with well controlled, technical and confident runs.

The female competitors all looked confident on course, hitting the jumps and rails with pace, so podium placing came down to who had the tricks. The Primary 5-6 win went to Charlotte Muir (Queenstown) with a left 3 on her first jump and stylish and controlled rail slides. In the Intermediate 7-8 group Zoe Smith had a switch 180, a 360 and looked stylish on the rails and was rewarded with the top score.

After their day competing on the slopestyle courses yesterday, the snowboarders were ready to race today and many were able to back up their podium placings. The racers first completed a single time trial on the Speed Zone Gravity-cross track before the fastest in each age category moved through to elimination rounds and then raced head to head for final positions.

Zoi Sadowski Synott (Wanaka) and Tiarn Collins (Queenstown) earned their second medals of the week in the 11-13 year Boarder cross along.

Zephyr Lovelock backed up his slopestyle win with a gold medal in Boarder Cross in the male Primary Year 5-6 group with hundredths of a second separating Rocco Jamieson in second and Campbell Melville Ives in third.

Unfortunately, a problem with the timing system has meant that these results will not be available until tomorrow.

Results will be available here 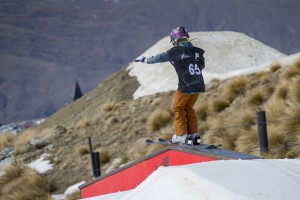