Day one of the K2 Big Mountain CHILL saw plenty of gnarliness and all round good times.

A small dusting overnight did little to soften the conditions and with a full entry field, the skiing was tough come day end. This seemed to phase the competitors none with some fast, technical and somewhat nuts skiing throughout the day. The day’s competition was held in Demolition Chutes at Mt Olympus and first up where the female snowboarders. The iced up crud at the end of the course proved difficult for all but the half American half Kiwi Tess Carney billy goated her way into first place. Nat Segal, fresh from a win at the World Heli Challenge, threw down and leads the female ski section after day one.

The men’s snowboard division was fiercely fought with some amazing riding by many coming undone by the tricky end of the course. Ruari mountain goat MacFarlane dominated both the top and bottom of the course to come away with the day’s honours.

The men’s ski was all over after the second competitor dropped. Frenchman Arnaud Lesueur simply went massive off his first air and didn’t worry about scrubbing speed afterwards. He then hit a near vertical rock drop and threw an enormous back flip that looked unconvincing in the air, before deciding to pull it together and stomping the landing to ski away in first place.

Honourable mentions must go to Tom Brownlee for a strong run, Cam McDermid’s solid line including a 360 tranny finder and wonder grom George Pengelly. George threw a 30 foot 360 onto the sketchiest of landings, despite washing out on his landing he looked good and still has a chance at the overall title with 3 more days of competition looking likely.

Tomorrow’s competition heads to “The Chuttes” and with punchy snow, fantastic coverage and this field expect some massive lines. K2 and CHILL’s tip, get up early and reserve the best viewing spot on the mountain..... the famous Mt Olympus Hot Tub! A moist enjoyable way to spend the day. 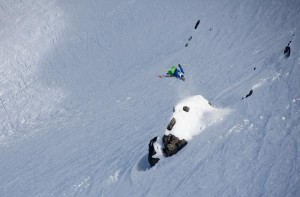