Alice Takes the Win in Gaal

Alice won the Giant Slalom in Gaal 0.14s ahead of Austria's Julia Scheib, scoring 11.90 FIS points to improve her GS ranking. She is now ranked among the world's top 70 female ski racers in Giant Slalom.

At the World Cup on 6 January Alice skied from start bib 53 to finish in 42nd place, missing the cut to qualify for a second run by 0.97s. (In World Cup racing only the top 30-placed athletes from the first run are able to start the second run.)

"I was feeling super excited about the World Cup," said Alice. "It was great to get into that environment and check everything out and I was pleased with how I skied.

"I was also really happy to get my first and second places in Gaal. It was my first FIS races in Europe so it was good to start it off with a win and to get a second place result." 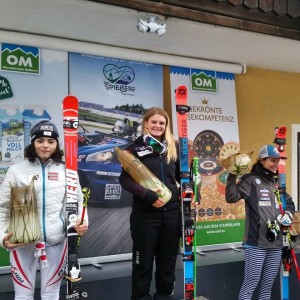