Both Zampa and Robinson scored 6 FIS point results today, the lowest (best) points possible in a race of this international calibre.

An ecstatic Robinson said, "It's such a nice feeling. It is crazy. My second run was definitely on the edge with a couple of close calls but it was solid. Conditions are great out there."

In the men’s field racing was very tight with second place going to Sam Maes of Belgium, 0.52 seconds back, and tied for third were teammates from the Netherlands, Steffan Winkelhorst and Maarten Meiners, both 1.31 seconds behind Zampa.

Zampa is no stranger to the Audi quattro Winter Games with 11 podium wins over the past years here at ANC events on Coronet Peak, seven of which have been Gold Medals. "I am very happy coming back from injury as last year was hard with my knee. This year I hope I am back and I am working very hard with my team. I hope we are in a good way before the Northern Winter. I am happy I won today!" Zampa said, smiling following his victory.

Conditions were bluebird at Coronet Peak today with the women and men racing on the same courses. Conditions softened in some parts of the course for the second run, producing some exciting and nail-biting finishes as the top 30 came scorching down the technical GS course ‘Outwide’ at Rocky Gully.

With a world-class field in both the men’s and women’s events, the second GS tomorrow is stacked again with world-class international athletes from New Zealand and across the globe. 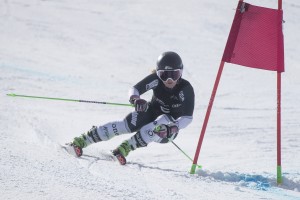