Robinson flew down the course in a time of 1:26:77, 2.13 seconds behind the winner, Ester Ledecka of the Czech Republic. The podium was rounded out with Corinne Suter (SUI) in second place and Federica Brignone (ITA) in third.

Robinson was pleased with her result. “I was hoping for a top 30 so 21st place is a really good result for me”.

Robinson is known for her success in the more technical discipline of Giant Slalom, in which she has claimed three World Cup Podiums in the last couple of seasons.

She explains that “Speed races like Super G are a completely different beast so it is definitely a big step up so it is pretty exciting. I was pretty happy to get 21st after everyone has been on that track for four days during the Downhill races but I just stepped onto it and I am happy with how it went.”

Next up Robinson will be focussing on the World Cup Giant Slalom to be held in Semmering, Austria on the 28th of December. With a 12th place in Sölden (October 2020) and two DNF’s in Courchevel (December 2020) she will be working hard to ensure she gets back on top of the Giant Slalom podium. 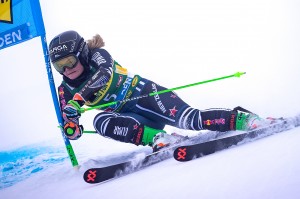