Alice Robinson has finished in 14th place at the FIS Giant Slalom World Cup tonight in Kranjska Gora, Slovenia. Just over one year ago Robinson took her second ever World Cup victory at this very race but was unsuccessful in defending her title tonight.

Robinson attacked the hard and icy course with her trademark aggressive skiing in run one, getting hung up on her inside ski a couple of times resulting in some minor errors which cost her precious time. She completed run one in a time of 1:06.48, +2.33 behind the leader Marta Bassino of Italy.

Run two was similar for Robinson, with small mistakes costing her valuable time. She finished the race +3.93 behind the winner Marta Bassino (ITA). Tessa Worley (FRA) and Michelle Gisin (SUI) rounded out the podium.

Fellow Kiwi competitor Piera Hudson started in bib 34 but recorded a DNF in run one. Hudson explained “I had a good start to my race but unfortunately hyper extended my knee coming off the first pitch and have sprained my lateral ligament. Fortunately, it doesn't seem too bad so we'll asses it again in the morning and see if I can race again tomorrow.”

The FIS Alpine World Cup continues Sunday night in Kranjska Gora, with a rare women's giant slalom doubleheader. Robinson and Hudson will be in the start gate with run one commencing at 9.15pm NZT. 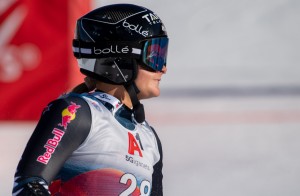