Alice Robinson (Queenstown) has finished in ninth place at the FIS World Cup Giant Slalom held in Italy overnight. This is Robinson’s second ninth place finish for the 2021 season.

Robinson came firing out of the start gate in run one and looked on form and in control for the first half of the run. As she came over the quick transition in the steep section she lost the pressure on her outside ski with the mistake costing her a significant amount of time.

After run one Robinson was sitting in 10th place, +1.82 seconds behind leader Michelle Gisin of Switzerland.

During her second run Robinson managed the pitch change with finesse and skied the course strongly from start gate to finish corral. Her time of 1:06:75 was in the mix with some of the faster run two times, but with run one and run two times combined to get the final result she finished in ninth place.

Fellow Kiwi Piera Hudson started in bib 33 but after a strong start got late on a gate and skied out, receiving a DNF.

This is Robinson’s last Giant Slalom race ahead of the World Championships to be held in Cortina, Italy from the 8th to the 21st of February. 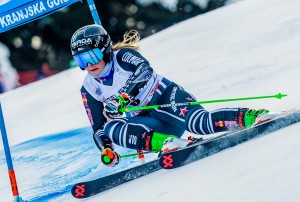