The Coronet Cup due to take place yesterday (Wednesday) had to be cancelled with the piste too soft for racing but an overnight freeze had competitors back on track today, with the course set on the Outwide run. The start list included 60 female and 83 male racers.

Alice Robinson had a solid start to the day, in her first run skiing from bib 49 into fourth place, 0.97s behind race leader Bettina Schneeberger (SUI). Canada-based Kiwi Georgia Willinger was the second fastest NZ woman, starting in bib 14 and sitting in sixth place after “a fun” first run. Piera Hudson (Havelock North/Wanaka) was close behind, in seventh.

The attrition rate was high amongst the men’s field on run one with less than half successfully completing the course and earning a start for run two.

Looking to defend his championship title, Adam Barwood (Queenstown) skied a safe first run, putting him into fourth place overall and 1.07s behind Germany’s Julian Rauchfuss. Team mate Willis Feasey (Twizel) found himself in the back seat just before the hairpins and skied out of the course, recording a DNF. Sam Andrews (Wanaka) skied a solid first run to make the top 30 flip from a start number of 62.

Run two got underway after lunch with the snow beginning to soften a little. Robinson impressed with another strong run to claim her second national title as well as pushing through into third for a spot on the overall podium.

“I’m really happy to keep the title,” said Barwood. “After missing out on the GS on Monday, it’s a bit of a relief. The result should help improve my world ranking as well.”

Sam Andrews was the second fastest New Zealander with Ben Loeffen-Gallagher also stepping on to the national podium in third.

The National Championships and Coronet Cup race series wrapped up with a prize giving ceremony on the deck at the Coronet Peak base building. 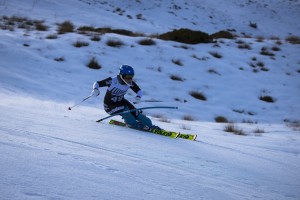