Winter Paralympians Adam Hall and Anthony Field and summer Paralympian Mary Fisher were amongst participants in a three-day camp, held at Cardrona Alpine Resort from 20-22 September 2014 as part of the Snow Sports Youth and Women Talent Identification Programme.

The programme is delivered by Snow Sports NZ and supported by the Agitos Foundation and Paralympics New Zealand. The Agitos Foundation is the leading global organisation developing sport activities for people with an impairment as a tool for changing lives.

This was the second camp of its kind to be held this winter season as Snow Sports NZ looks to identify and support emerging talent amongst adaptive snow sports athletes. The first camp was held at Turoa in August.

As well as developing their skills, the athletes were classified for competition. Using the International Paralympic Committee (IPC) classification system athletes are grouped according to their functional ability, with factored timing allowing those with different impairments to compete against each other.

Adam Hall and Anthony Field, who competed together at the Torino Paralympic Winter Games in 2006, took on a mentoring role and were on hand to give camp participants an insight into what it takes to reach the pinnacle of their sport and compete on the world stage. Adam Hall gave an informative talk on the Paralympic movement.

“It was great to have Adam chat to us about how he came through the ranks to win gold in Vancouver and go onto Sochi,” explained Mary Fisher who won multiple Paralympic medals at the London Paralympic Games in 2012. A keen skier for many years, Mary attended the camp to learn about the snow sports Paralympic pathway.

“It was great to meet the Snow Sports NZ team and learn about the pathways athletes use to get to major international events and places along the way,” she said.

Paralympian Anthony Field was involved in mentoring a younger athlete with a similar disability to his own. Anthony lost his right arm in a car accident at the age of eight. As a camp mentor he was able to provide both a skiing ‘model’ and inspiration that there is a defined path to reach International Paralympic Committee level competition given the correct training, effort and attitude.

Anthony also attended the camp in order to improve his own coaching skills.

“During the weekend I learned that the coach has a special role to play in analysing and describing to the athlete what skills need to be developed, both physically and mentally,” he explains. “The coach plays a pivotal role, especially in adaptive skiing in analysing different movement patterns involved with various disabilities and creating a programme to shift these toward a ‘racing’ style, allowing the athlete to ski powerfully, efficiently and in control.”

Unfortunately poor weather conditions caused the cancellation of the planned ski racing. However, camp participants made valuable use of their time visiting the High Performance Sport NZ Resource Centre in Wanaka and meeting with Snow Sports NZ staff and providers. High Performance Director and 2014 Chef de Mission at the Sochi Games, Ashley Light talked about the Paralympic pathway and high performance environment.

“We are very grateful to the Agitos Foundation and Paralympics New Zealand for supporting our Talent Identification and Development Camps,” says Snow Sports NZ Adaptive Manager, Jane Stevens. “We’ve had great feedback from participants at both the Turoa and Cardrona Camps and look forward to building on this at the Mount Hutt camp to be held in June next year.” 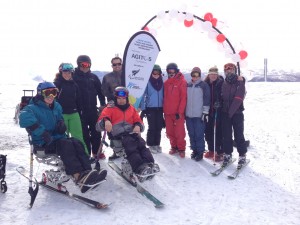