With a consistent string of top five finishes in the season’s build-up and near perfect snow and weather conditions today, Hall felt confident coming into the race. The technical Slalom is his preferred discipline and his performance today showed that he still has the form which saw him claim gold in this event at the 2010 Paralympic Games.

The first course set was technical and challenging, “Which is what we expect at such an event,” explained Hall. The Kiwi held a slight lead, just 10ths of a second ahead of Russian superstar Alexei Bugaev, winner of the 2014 Sochi Paralympic Games Slalom.

With the pressure on in run two the Russian skier made an early mistake at the top of the course putting him out of the race. Hiraku of Japan put down a blistering second run but it wasn't quite enough to take the lead from Hall. Australian skier Mitchell Gourlay had a good second run to bring in bronze.

“What a day!” said Hall after the race. “I’m pretty happy and satisfied with today’s slalom race here in Aspen at the World Cup finals.

“I had to keep fighting as hard as I could from top to bottom.”

Corey Peters had a less successful day in the men’s sitting category, sliding out of the course ten gates from the finish on his first run. 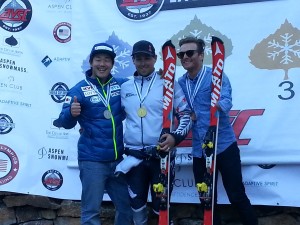