The world no 8 easily beat world no 3 Arthur Bauchet of France in silver by 0.39sec and world no 4 Jamie Stanton of the USA in bronze by 1.26sec, after these two men entered the final a split second ahead of Hall after Run 1 earlier today. Hall entered Run 2, which is added to Run 1 to create a combined final time, in third equal with Australian Mitchell Gourley, who eventually finished 6th place.

This gold medal tops off a spectacular week for the veteran Para skier, after he won a bronze in the Men’s Super Combined on Tuesday and yesterday, was announced as the male athlete winner of the prestigious Whang Yuon Dai Achievement Award. This award is presented to only one male and one female Paralympian at each Paralympic Games, chosen as the athletes that best exemplify the spirit of the Paralympic Games and the Paralympic values. Hall will be presented with a 75 gram pure gold medal during the PyeongChang 2018 Paralympic Winter Games Closing Ceremony tomorrow night.

This latest medal is New Zealand’s 31st winter Paralympic medal, made up of 16 gold, 6 silver and 9 bronze medals. It is the country’s 221st Paralympic medal across the winter and summer Games.

Today’s result concludes the PyeongChang 2018 Paralympic Winter Games for New Zealand. The team has delivered a series of stunning performances across the past 8 days and will return home triumphant, with a bronze from Corey Peters in the Men’s Downhill Sitting, a bronze from Adam Hall in the Men’s Super Combined Standing and gold in the Men’s Slalom Standing and several spectacular Top 10s, including a great 5th place for Carl Murphy in Men’s Snowboard Banked Slalom yesterday. 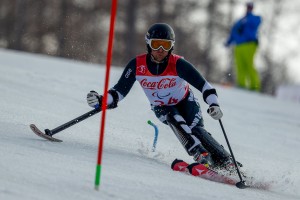