Matrei, Austria (18 January 2015) – With just over one month to go until the pinnacle event of his northern hemisphere season, NZ adaptive skier Adam Hall has been managing a hectic race schedule and claiming podium spots against a world class field. Hall was in Matrei, Austria competing in IPC Europa Cup races from 16-18 January and claimed bronze medals in super combined and slalom. His main focus for the season is the 2015 IPC Alpine Skiing World Championships, which take place in Panorama, Canada, from 28 February - 10 March.

Friday's super combined races, featuring super-G and slalom, saw the Kiwi face off against a strong field which included Paralympic champion Alexey Bugaev of Russia. However, a mistake by the young Russian skier saw him fail to finish his slalom run and teammate Alexander Alyabyev take first place. It was a tight scramble for the podium with Alyabyev coming home in 1:39.79s, Christoph Schneider (Austria) second in 1:40.80s and Adam Hall a very close third in 1:40.89s.

Saturday’s slalom event saw Hall pick up his second podium, finishing third behind the Russian pair of Bugaev in first and Alyabyev in second. A speedy second run by the Kiwi meant another close finish between second and third with Hall finishing in 1:20.42s and Alyabyev in 1:20.11s. Bugaev claimed a convincing win in 1:16.94s.

"It has been a really good couple of weeks under extremely high volume training and competion," says Adam. These two weeks have been a good benchmark to see where I stand not just going into World Champs in March but also a good mark to measure and test some changes in my skiing which we continue to work hard on. To see this being transferred from months of hard training into a world class racing environment is a very positive thing as I progress forward. Especially under such high demand, high intensity non stop couple of weeks. I definitely look forward to heading back State side to freshen up for a few days before getting back into hard training leading into my final build up for Worlds."

“Adam has been skiing technically well during his time in Europe but after the hectic race schedule it will be good for us to head back to the States for a rest followed by a strength and conditioning block,” commented his coach Ben Adams. “Following that we’ll look ahead hopefully to doing well in World Champs.” 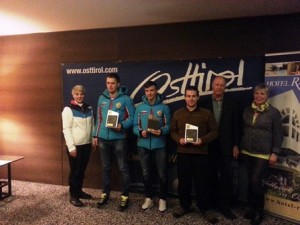