Hall won BRONZE in the Men's Standing Slalom in a time of 1:33.21 just under a second behind Jingyi Liang of China in second place.

On his first run he led the field until Arthur Bauchet’s run, which was over 2 seconds faster. No other athlete could match the pair however, and Hall went into run two ranked second. Bauchet capitalised on his lead in the second run, achieving a time of 1:29.61.

Slalom is Hall’s specialist discipline, and it could be clearly seen in his dominance in the event, which commentators described as “millimetre perfect”.

This is Hall’s fifth Paralympic medal, along with the two Slalom golds he won at Vancouver 2010 and PyeongChang  2018 Paralympic Winter Games, and the two bronzes he has won in Super Combined – the most recent here in Beijing.

Teammate Aaron Ewen has achieved his second top ten finish in what is his Paralympic debut. Ewen finished in 9th place in the men's sitting category in the Slalom. 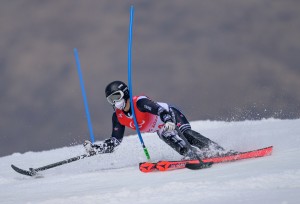