Copper Mountain, Colorado, USA (17 December 2012) – Paralympic skier Adam Hall (Dunedin) and emerging adaptive sit-skier Corey Peters (New Plymouth) have made a positive start to their season competing in a Nor-Am event at Copper Mountain, Colorado from 10 – 14 December 2012. Against a strong field of competitors Adam won both of the Slalom races and took second in both Super G’s showing why he is ranked number one in slalom and three in Super G in the world.

At Nor-Am Cup races, aspiring ski stars get the chance to compete at an international level. Nor-Am races allow athletes to prepare mentally and technically for World Cup racing. The Copper Mountain event included the disciplines of Giant Slalom, Slalom and Super-G.

“I was extremely happy with how I performed considering it was my first day in Super G gates due to lack of snow early on in the season here in Colorado,” said Adam. “It was a challenging day as a brutal storm came in providing us with temperatures as low as minus 30 degrees Celsius. Some of the most challenging conditions I have raced in Super G.”

Corey is at the developmental stage of his career and returned solid results placing mid-field in the Sitting 1 category with an 11th place in the first race and 12th in the second race. In the following day’s Giant Slalom he gained a 14th place.

Adam Hall does not race Giant Slalom so was able to take Tuesday and Wednesday as rest days but unfortunately found himself battling a cold. “This made things a little more difficult than I would have liked going into Thursday and Friday’s races in the Slalom events,” he explained.

In spite of his health issues Adam once again showed his class, managing to claim the top podium spot in both Slalom events.

“I was extremely happy with how the week of competition went. I fulfilled my goals for the week of staying in the top three across all events.”

“This first race of the season is always a good opportunity to benchmark where we are at, how our equipment is working and how we prepare tactically for a race athletically and as a team,” commented Jon Turnbull, Snow Sports NZ Performance Manager and Chef de Mission for the Sochi 2014 Paralympics.

“This shows us that Adam is on track and identifies our direction for training over the next few weeks leading into the La Molina World Championships, World Cup Finals and Sochi Winter Paralympics Test Event in February 2013.”

Adam Hall and Corey Peters will now return to their northern hemisphere base at Winter Park, Colorado, taking a couple of days’ recovery before their next competition at Winter Park from 1-3 January 2013. 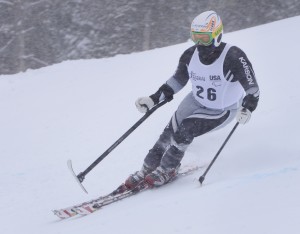