Paralympics New Zealand has named Adam Hall as the NZ team flag bearer at the Sochi 2014 Paralympic Games in Russia.   A three-time Paralympian (Turino 1996, Vancouver 2010 and now Sochi) Adam will be seeking to win a second gold medal after his dramatic slalom performance in Vancouver.

Adam is a senior athlete and epitomises all that is good in sport in New Zealand and on the international stage.  He is a true professional and a role model to the team, other Paralympians and able-bodied athletes.

Adam says, “It is obviously a great honour to be selected to represent our country at the Paralympic Winter Games and I have been fortunate to attend two previous games.”  He continues, “You dream of being the flag bearer and maybe, if you are lucky, this happens once in your career as an athlete. This will be the second time I will carry the flag for the NZ and the team here in Sochi and I am humbled and excited about doing it, keep an eye out for a very active flag during the march.”

The team, including athletes Corey Peters and Carl Murphy, is excited about the opening ceremony and looking forward to starting competition.

Led by Adam Hall, carrying the New Zealand flag, the New Zealand Paralympic Winter team will be dressed in the traditional black and white.  In homage to the Russian people, and somewhat unusually among teams here in Sochi, the New Zealand team’s uniform will also feature the words ‘New Zealand’ written in the Cyrillic alphabet.

Ashley Light (Chef de Mission) said the athletes are looking forward to the opening ceremony tonight. “We’re delighted all of the athletes in Sochi can march. They’ll be proud to march behind our flag and share in the experience of what is expected to be a magnificent opening ceremony.” 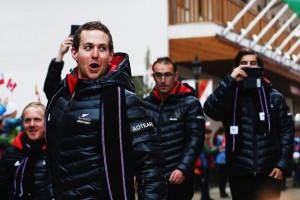