Sochi, Russia (11 March 2014) – Following their promising performances in the Super-G event on Sunday, New Zealand Paralympians Adam Hall and Corey Peters returned to the Rosa Khutor Alpine Centre on Tuesday ready for action in the Super-combined event. Their first challenge, however, would be the weather.

With rain and fog reducing visibility on course, competitors waited for close to four hours to see if conditions would improve enough to allow the race to start. In its usual format the Super-Combined event involves one run of a Super Giant Slalom (Super-G) course followed by a single run of Slalom on the same day. Times from the two runs are added together to determine the final results based on total time.

Weather conditions in Sochi on Tuesday meant that organisers were forced to change the event format, postponing the Super-G event until Friday but still running the Slalom on Tuesday afternoon (Tuesday night NZT).

The combined event tests a skier's ability to handle both the speed (Super-G) and technical (Slalom) aspects of alpine skiing. With only just enough visibility to see the gates and on a very steep course the skiers’ Slalom skills would be tested to their maximum and the attrition rate would be high. Only those who successfully completed their Slalom run would be able to start the Super-G run.

Putting behind him the disappointment of a DNF in the Super-G on Sunday Adam was determined to put together two clean runs in the Super-Combined starting out with his strongest discipline, the Slalom.

Holding his line through the rutted course and making a good recovery after a falter on the lower section, Adam finished in a time of 53.00s, 2.7s of the leader, putting him into fourth position.

“It’s obviously really challenging and demanding when things happen like that but I skied to the best of my ability considering the conditions,” said Adam.

The drama behind the super-combined event lies in the fact that the overall winner, with the fastest combined time, is not necessarily the winner of either of the two individual runs. With the speed event still to come there will be plenty of opportunity for a shake-up in the final placings. Adam Hall will be looking to find the speed he displayed in Sunday’s Super-G during which he posted some of the day’s fastest split times.

“The super-combined is designed to find the best overall skier, in speed as well as technical,” explained Chef de Mission Ashley Light after the race. “For Adam to be in that top five is pretty phenomenal in itself. You’ve got to be in that space to be able to post (a podium result). The way the courses are running at the moment with a lot of DNFs and difficult conditions, certainly Adam’s well in the hunt for that top three position.”

Also battling for podium spots will be Austria's Matthias Lanzinger, the reigning world champion in the event who sits in third place after today’s race.  Lanzinger will be itching for gold after winning silver in super-G and taking fourth in the downhill. Russia’s Alexey Bugaev currently sits in first place with Canada’s Braydon Luscombe second.

Competitors in the men’s sitting class were the last racers to take to the course and faced the difficult task of keeping their speed in check whilst being bounced around on the now very bumpy course.

Fewer than half the field would finish the course.

Corey Peters took a cautious but determined approach, picking his way down the course and losing speed on the flatter section but ultimately making it through the finish gates. His time of 1:03.24 puts him in 7th place 4.53s off the leader, Austria’s Roman Rabl.

“It wasn’t anywhere near my cleanest Slalom I’ve done,” he commented after the race. “I just knew I had to play it safe. Everyone was maybe pushing it too hard for the conditions so I backed off a little bit and just played it safe.

“That was my one goal (to finish the course). I just wanted to fight to the end basically to give me that chance of getting a super-g run.

“At the moment anything can happen at these games with the conditions the way they are. I’m a little bit behind on the time but can hopefully make that up in the super-g.”

Chef de Mission, Ashley Light praised Corey’s performance, particularly given that Corey is a relative new-comer to the sport and prefers speed to technical events.

“It just goes to show what an amazingly skilled athlete he is and the determination he has,” said Ashley Light. “He made a couple of mistakes early in the piece, but fought his way back to get down the hill.”

The men’s and women’s Super-G races of the Super-combined have been moved to Friday 14 March from 2pm-4pm Sochi time (11pm – 1am NZ time).

The New Zealand team will first compete in the Slalom event early on Friday morning (NZ time). Adam Hall will be looking to defend the title he earned at the Vancouver Games in 2010. He believes that today’s competition will put him in good stead for the main Slalom event.

The Sochi 2014 Winter Paralympic Games continue until 16 March with 45 teams and 547 athletes competing.

The Sochi 2014 Paralympic Winter Games have already smashed significant records for ticket sales and online visitors. So far, more than 300,000 tickets have been sold - eclipsing the previous record of 230,000 sold in Vancouver four years ago

The Games are also proving an online success with more people visiting the IPC's website www.paralympic.org in the first 24 hours of the Games, than the whole of the Vancouver 2010 Paralympic Winter Games which spanned 10 days, underlining the growing appeal of the Paralympic Games. 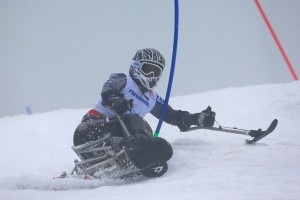