It was the first and last race of the northern hemisphere season for New Zealand’s double Paralympic gold medallist. Poor weather conditions led to the cancellation of races in Pitzal, Austria earlier in the month and the World Cup season opener due to take place in Sella Nevea, Italy from 19 to 21 December, has also been cancelled due to weather conditions.

“I’m pretty happy and satisfied to finally get a race in and see how the competition is stacking up post-Games in Korea. It was a good little bench mark for us,” said Adam.

Adam was placed third after the first run of a highly technical slalom course which saw 22 athletes fail to finish. A clean second run saw him jump up in to second behind France’s Arthur Bauchet.

Team mate Corey Peters claimed a fourth-place finish in the Giant Slalom on Friday 14 December and was also pleased to be back in the mix in his first race since the Paralympic Winter Games in March.

The team now travel to Italy for a few days’ training in lieu of World Cup racing and Adam will then return to New Zealand for his first southern hemisphere Christmas in 15 years and will remain at home for the summer. Adam and his wife, Elitsa, are expecting their first baby in February. 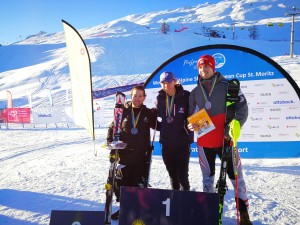