Adam Hall and Corey Peters Ready to Take on the World

Panorama 2015 has attracted 130 skiers from 30 countries. The Opening Ceremony took place yesterday (28 February) and downhill will kick-off the action on 4 March. Adam and Corey will compete in all ski racing disciplines, Adam in the men’s standing category and Corey in the men’s sitting category.

“It’s the first time in a long time that I have competed in all five events (Downhill, Slalom, Super G, Giant Slalom, Super Combined),” explains Adam. “It’s something that I find pretty exciting and I’m looking forward to a good long hard week of racing. Doing all five events is going to be a good challenge for me. I have worked and trained really hard to be able to manage such a big load compared to other seasons and I am ready to go.

“Since the Paralympic Winter Games in Sochi I have been working really hard on changing up the way I ski technically. This is something that takes a lot of effort, trust and time. I am really happy with how my progress has gone so far with such big changes happening in such a short period of time. If I race with those technical focuses I have been working on then I will be pretty happy.”

Corey will also compete in all five events although his main focus will be the Super-G and the Giant Slalom, the discipline in which he won his silver medal at the Sochi Games. He admits to some nerves ahead of the downhill on Thursday, an event which sees racers reach speeds of up to 120km/h, “but I know the skills are there and once the start wand breaks my game face will be on and it'll be all go.

“I’ve decided now is a good time to get a little more comfortable with the speeds and hopefully that'll help my Super G,” he says.

Corey and Adam both report that “preparation has been going well with some good training days. It’s been a fairly busy schedule this season with a lot more traveling than usual to World Cup races in Europe but the body feels in pretty good shape and ready to race.”

The busy schedule has paid off in terms of results over the course of the 2015 northern hemisphere season with both athletes securing podium places at World Cups, Europa Cups and North America Cups.

Panorama 2015 will be Adam Hall’s fourth World Championships. He won bronze in the Slalom at the 2013 event and silver in Slalom in 2009. Corey Peters made his World Championship debut in 2013 and finished 10th in the Giant Slalom. 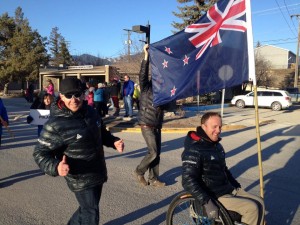