Aspen, USA (6 April 2017) - NZ ski racers Adam Barwood and Willis Feasey are closing out their Northern Hemisphere season with strong results, and most recently gold and silver medals in Super-G at the Surefoot Spring Series in the USA.

The 10.08 FIS points for Adam and 15.26 points for Willis are career-best results in Super-G for both skiers.

"I'm very happy to get a career best Super-G result (15.26 points) here in Aspen," says Willis. "Both Adam and I have been skiing really well, just making a few unnecessary mistakes, so it's pretty cool to put together a good run at the same time and share the podium with my team mate."

"I couldn't be happier with my result today," says Adam. "I was three tenths of a second behind the lead on the top flats but carried good speed the rest of the way and off the steep into the finish to put me in the lead. "

Adam and Willis have maintained good form throughout a busy season spent competing throughout Europe and North America. At the North America Cup races held at Sugarloaf resort in the USA at the end of March, Feasey finished fourth and seventh in Super-G and fifth in the Alpine Combined. Barwood finished sixth in Super-G and and ninth in Giant Slalom at the US National Championships held at the same resort a few days later.

They have two more days of GS racing in Aspen, followed by two Slalom races in Vail before wrapping up the Northern Hemisphere season and returning to NZ. 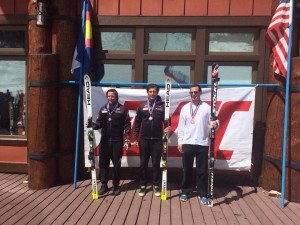