Sochi, Russia ( 19 February 2014) - The focus of the New Zealand Olympic Winter team turned to the Rosa Khutor Alpine Park on Wednesday as ski racer Adam Barwood lined up for the first of his two events, the Giant Slalom.

The 21 year old, who is currently New Zealand’s National Champion in both Slalom and Giant Slalom, started in bib 50 from a field of 109.

The weather in Sochi had taken a turn for the better bringing clear and cold conditions and a hard and fast race track.

Giant Slalom (GS), like Slalom, is a technical event but in GS the gates are set further apart making for wider and fewer race turns. Final results are calculated on the sum of the skier’s times over two runs and on two different courses. Skiers must successfully complete their first run to be able to start a second run.

For Adam Barwood, a first time Olympian, finding the perfect balance between speed and precision would be critical. The only way to settle the Olympic nerves would be to make it safely through the first run.

Showing both power and composure Adam did exactly that, finishing run one in a time of 1:28:51 and sitting in 49th position, 7.43s behind racer leader Ted Ligety.  Only 79 racers would qualify for the second run, Adam Barwood amongst them,  the New Zealander having held on for the finish line where others had succumb to the steep and technical course.

The top 30 skiers would be the first to start in run two, starting in reverse order and followed by positions 31- 79. With the new course set the skiers would have only 30 minutes to complete a course inspection and familiarise themselves with the new pattern of gates before the race got underway.

Adam continued to demonstrate good form on his second run finishing strongly in a time of 1:28.89 and giving him a combined time of 2:57.40.

Afterwards Adam confirmed that he was “pretty happy with how everything went” and that he had met a personal performance goal.

“I was going to be really happy if I moved up (in the rankings) and skied as well as I could.”

His final finishing position would be 44th, a five place improvement on his first run position.

“Finishing in the top fifty percent of the starting field was a general goal for us. But also for Adam to get some good experience out of this, to improve every run and I think he showed that in his second run, that he’s starting to step it up.”

Adam will now turn his attention to his preferred discipline of Slalom with his race scheduled for Saturday 22nd.

Both athlete and coach were in agreement that today’s GS race would stand Adam in good stead for the Slalom event.

“It’s almost a bit of a relief to get the first race out of the way and finish well, so now I can just focus on the Slalom,” commented Adam.

“We’re expecting him to step it up even more in the Slalom,” added his coach.

Olympic medals in the men’s Giant Slalom went to: 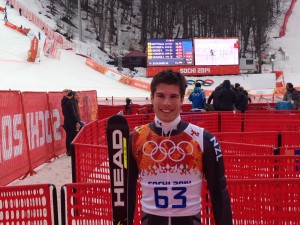