In the men’s race the battle for the national title was a close call between Barwood and defending champion Willis Feasey (Twizel). Barwood was just ahead after the first of two runs in a time of 46.31s with Feasey close behind on 46.88s. Each knew there was plenty of work to be done on run two.

“There were a few unnecessary wash outs on my turns and I didn’t let it run enough,” said Barwood. “I need to take more risk on the second run.”

“It was a tough first run and I made a couple of mistakes on the flat which killed some speed,” said Feasey.

Hansi Schwaiger (GER) and Robby Kelley (USA) led the field, both recording a time of 45.42s. Barwood was placed seventh overall and Feasey ninth after the first run.

Defending NZ women’s champion Piera Hudson had a “frustrating” first run which left her sitting 12th overall on a time of 50.80s and behind Elizabeth Reid (first Kiwi, eighth overall) on 50.10s. Poland’s Sabina Majerczyk held the first run lead with a time of 48.18s but only just ahead of Andreja Slokar (SVK) on 48.19s.

Run two got underway after a course reset, the weather staying clear but the snow beginning to soften and become rutted on course.

Not entirely satisfied with her skiing on run one, Reid knew she would have to really attack the course and “keep a cool head” if she was going to stay ahead of Hudson, and claim the national title.

Her plan came together, Reid holding consistent form from top to bottom of the course and finishing in a time of 1.41.29s ahead of Piera Hudson on 1.42.37s and third placed Kiwi woman Eliza Grigg (Darfield) on 1.46.90s.

“It’s an awesome feeling to finally win the title,” said Reid. “This is my third year competing at Nationals, I came second in my first year so I’m really happy to pull it off today. It’s taken lots of training. I made the call not to compete in the Giant Slalom yesterday (for the Coronet Cup) but to train Slalom instead.”

In the men’s race Adam Barwood put together a strong second run, finding a clean line through the ruts and keeping mistakes to a minimum to hold his lead over Willis Feasey. Barwood finished as first NZ competitor, sixth overall in a time of 1:37.05s, Feasey was one place behind on overall rankings with a time of 1:37.43s. Colbey Derwin rounded out the NZ national podium with a time of 1:40.68s for 19th overall.

Robby Kelley found the edge he needed for the overall win, beating Hansi Scchwaiger by 0.59s in a winning time of 1:35.22s. William St-Germain (CAN) placed third overall. 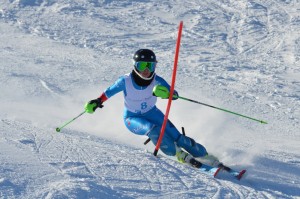