The hard and fast conditions were better suited to the race course than the freeride event and the skiers faced a delayed start with the hope that snow conditions on the Tulips course would soften. A call was then made to start U12, U10 and U8 age groups lower down the course on a face where the snow had released.

In the biggest age group of the day with 21 competitors, the U12 boys came charging out of the start gate looking completely undeterred by the late change of course and ready to attack any feature they could find. The judges had a tough decision separating first and second place, with two very different lines and very strong skiing.

Aiden Fitzpatrick (Wanaka) was awarded the win, making an impressive entry in to the arena, linking a double stage cliff in to a fall line drop off the ledge before straight lining the chopped-up venue as though it were a groomed run. Right on his heels was Joe Cookson (Hororata) who made fast aggressive turns through the course, showing no hesitation, and launching a huge grabbed air.

The judges were impressed by the U10 girls and had another difficult job deciding the winner. Poppy Freeman (Hororata) earned top marks, handling the conditions well, with fast fluid skiing and the biggest rock drop in her class. Eva Small (Wanaka) finished a close second, weaving her way through the rocks at the top and linking lots of features in to her run.

Logan Millar (Wanaka) was the winner of U10 boys’ group, earning his gold medal with strong, technical skiing and a creative line.

A decision was made to postpone the U14-U18 Ski Freeride  with snow conditions at the top of the course deemed unsafe for competition.

There were plenty of thrills and spills on the gravity cross course as the snowboard competitors raced four at a time through the banked turns and rollers, often only millimetres apart. A good start out of the gate was once again key and those racers who got the head start and successfully negotiated the first few features before heading in to the first corner generally came away with the win, although the tricky hip feature near the bottom of the course got the better of a couple of riders.

The boys’ U16 and U18 fields in particular saw some good tangles with riders falling, getting passed, getting back up again and still finishing on the podium. Australian riders topped both podiums with Max Vardy taking the win in U16 and Brayden Jelley in the U18.

The Junior Nationals continue tomorrow at Cardrona with the Salomon Ski and Snowboard Halfpipe. 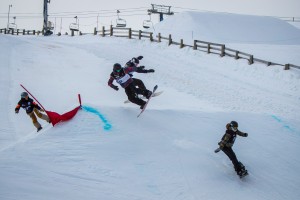