After a day of postponement due to weather yesterday, day two of the Cardrona Snowsports NZ Freestyle Junior Nationals took place under sunny skies with cool conditions. Both the skiers and the snowboarders battled it out in the International Halfpipe for the Salomon Halfpipe Competition. After the Snowboarders had finished their halfpipe runs, they made their way to the Gravity Cross course to compete in the Smith Boarder Cross.

Halfpipe is judged by a panel on the overall impression of the athletes run. The athletes get two runs, with the best score counting in the straight finals format used today.

Head ski judge Tori Beattie said “It is awesome to see a halfpipe event, they (Cardrona) did a great job shaping the mini pipe. This year everyone was competing in the same pipe for the first time in many years, creating an even playing field”. Tori further explained how “the U12 ski divisions were some of the biggest of the day with such strong skiing ability and plenty of depth in the field”.

Sylvia Trotter stood out in her category, the U14 Girls Ski, skiing a great run with nice grabs and a 360 at the bottom. “My day was pretty good, it was really fun hanging out with my friends. My favourite thing about competing is the fact that everybody is there and we all get together and have fun, we do our runs and then we ski together for the rest of the day”.

Ferguson Mcarthur won the hotly contested U16 Boys Ski division, his run containing a big flair, an Ally-Oop and a left 540. This was one of the biggest trick combos that the judges saw today. “My day was very good. I stuffed up my first run a little bit, but I made a comeback in my second run. The pressure from the other athletes was quite intense but it was also a friendly environment and I had a really good day”.

Head snowboard judge Keith Stubbs explained it was “great to see progression in challenging conditions”. He identified the standout category as the U16 Boys, which was “really hard to judge, we had five riders who were all podium contenders”.

Cam Melville Ives took the win in the U16 Boys Snowboard with an awesome run which included two inverted tricks, back to back 540’s with consistently huge amplitude. “My day was pretty sick, such a fun day. It’s a low-key fun event and anybody can join in and have fun!”.

Lucia Georgalli, U14 Girls Snowboard, was sitting in the lead with her first run score but stepped it up on her second run to beat her own score and take the win in the halfpipe. Her run started off with a big frontside 360 Indy grab into a cab 360. She spun in all four directions and had huge amplitude, making her a standout in her division.

Lucia summed up her day in the halfpipe; “The morning was icy but then the pipe started to slush up and it was really good after that. The competition was fun, the other girls were good and some of them had really good runs”.

After completing their halfpipe runs the Snowboarders made their way over to the Gravity Cross course for the Smith Boarder-Cross race, which had been postponed from yesterday due to weather. Always an exciting event, riders race head to head in knock out format to determine an overall winner.

In the U14 girls final Lucia Georgalli took the lead from the second gate and maintained the lead throughout the rest of the course to take her second win of the day. The U14 Boys was a very exciting race, with the athletes getting caught up on each other just before the first corner resulting in a couple of crashes and a total reshuffling of the order, with James Garth ending up victorious.

The U16 Boys final kept you on the edge of your seat, with National Development teammates Txema Mazet-Brown and Oscar Georgalli neck and neck the entire way. Txema explained “my race was good, I was second for most of the competition then I tried to overtake him (Oscar), but I couldn’t quite get around and then I got him right at the end with ten metres left to go”.

The NZ Junior Nationals have been running for over a decade. As well as being a fun competition to finish off the season, they are an important stepping stone on the competitive pathway for Kiwi snow sports athletes. The competition continues at Cardrona tomorrow (Thursday 8 October) with the Salomon Ski and Snowboard Slopestyle. The Cardrona Snow Sports NZ Junior Freestyle Nationals run from the 5th to the 9th of October 2020. 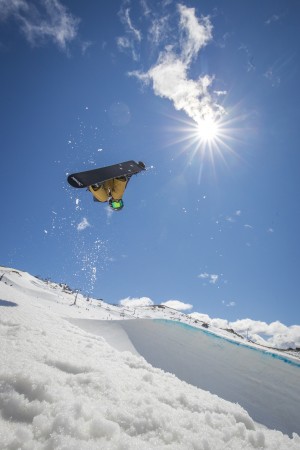