A Hard Road to PyeongChang

The Winter Olympic qualifying period is underway and there are no two ways about it: it’s going to be a tough few months on the road to PyeongChang2018.

While New Zealand snow sports athletes achieved remarkable results throughout the 2015-16 season – arguably one the most successful seasons ever –the scoreboard has now been wiped clean and the hard work is all still to come. NZ athletes will need to step up to the mark once again and push harder, higher and faster for even better results this season or, quite simply, Olympic qualifying is off the table.

“Now is not the time to be resting on our laurels,” cautions Snow Sports NZ High Performance Director Ashley Light. “We’ve reached the critical point in the four-year Olympic cycle. The first two years are a lot like kicking the ball around. The next two years are where the whole world steps up and focuses on the goal.”

The first Snowboard Big Air World Cup of the season, held in Milan in mid-November, was the perfect case in point. Anna Gasser (AUT) and Marcus Kleveland (NOR) claimed wins against world-class fields. It was a career first for both, only Gasser's second World Cup podium and Kleveland's World Cup debut. New names, new talent and – most significantly in the freestyle disciplines – new tricks are emerging all the time.

Trick progression within the Olympic freestyle sports (freeski slopestyle and halfpipe, snowboard slopestyle, halfpipe and big air) continues to develop unabated. What it will take to win an Olympic medal in 2018 will be very different to 2014.  For example, two years ago triples had the ‘Wow’ factor, these days they’re the par to a podium place at the sport’s premier events.

Carlos landed a back double cork 1080 nose grab on his first run and with a switch backside 1260 also in the trick bag there was every chance of improving his score to within the top 10. But on the night he couldn’t make the landing stick.

While his result was enough to tick one box on the Olympic qualifying criteria - a top-30 World Cup result within the qualifying period 1 July 2016 to 21 January 2018 - Carlos went into his next event two weeks later, “with the switch back 12 on my mind.”

This season's second Big Air World Cup competition was staged at Alpensia Ski Stadium in Korea on 25-26 November and served as a test event for PyeongChang 2018. Carlos Garcia Knight and Natalie Good were joined by fellow Kiwis Tiarn Collins and Corrah Phillips, both making World Cup Big Air debuts and hitting a scaffolding jump for the first time.

Anna Gasser was able to keep the momentum from her triumph at Milan and celebrated another impressive win in Korea after landing a cab double cork 900 and a backside 720 mute.

The men’s finals delivered another high-level snowboard show packed with a variety of tricks. Canadian Mark McMorris had to up the ante in the last round of the finals of the top ten men to claim the second World Cup win of his career. Coming from a third rank finish in Milan and after landing a backside triple cork 1440 indy in his first run, the 22-year-old was the only one to stomp a frontside triple cork 1440 mute.

Max Parrot’s (CAN) first ever landed cab triple cork 1620 on a scaffolding jump was enough for second place while a switch backside 1260 helped Ryan Stassel (USA) to third.

The Kiwi athletes missed out on finals. Carlos Garcia Knight pushed hard for his qualification trick, the switch backside double cork 1260 with an indy grab, but was unable to land either of his two competition runs and finished his day in 46th place. Tiarn Collins made a solid start to his competition season, landing a backside 1080 mute grab on his first run. He went for the step up trick on run two but was unable to land the backside double cork 1260 he was after and finished in 31st place.

In terms of Olympic qualifying there’s plenty of work still to be done. Athletes will in turn need to meet qualification, nomination and selection criteria set by the International Ski Federation (FIS), Snow Sports NZ, and finally the New Zealand Olympic Committee.

FIS eligibility criteria for Snowboard Slopestyle and Big Air at PyeongChang 2018 requires an athlete to achieve one top 30 World Cup result and 50 FIS points in the qualifying period.

An Olympic quota spot must first be earned for New Zealand before personal spots can be allocated which means being ranked in the top 40 men or top 30 ladies (with a maximum of four spots per nation) on the Olympic World Ranking List. Where there are more athletes eligible than quota spots, athletes will be ranked by the Snow Sports NZ selectors for nomination to the New Zealand Olympic Committee based on the SSNZ nomination criteria.

SSNZ and NZOC require an athlete to compete in a minimum of four World Cups or three World Cups and a World Champs event within the qualifying period, and achieve two top-16 results at these events.

The next opportunity to bag qualifying points will roll around in a week’s time with Carlos Garcia Knight and Natalie Good back in action at the Big Air World Cup in Moenchengladbach, Germany on 3 December. The NZ Olympic hopefuls will be wanting to be part of the sport’s progressions rather than watching as interested observers. 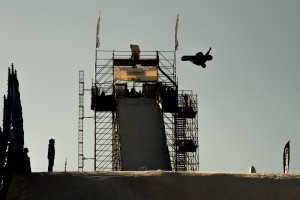