The opening day of the Torpedo7 NZ Freestyle Nationals saw freeski competitors racing head-to-head down the Smith Skier-Cross course at Cardrona. Despite the cloud that sat on the mountain throughout the day, the level of enthusiasm of our young competitors was high!

The Smith Skier-Cross course is an exciting course with rolls, bumps and bermed corners to navigate all while making your way through the alternating blue and red gates. First up are time trials to seed the athletes in their age division. They then race shoulder to shoulder in an exciting knockout format until the fastest skier is crowned champion.

Kiri Dolan (Wanaka Snowsports Club) took out the Girls U8 division with a fantastic run in the finals. Kiri explained she had a really fun day and enjoyed going around all the gates on the course and competing with her friends.

“I came second and I had lots of fun!” explained Michaela Bridgens (Wanaka Snowsports Club) who took the silver medal in the Girls U12 division.

Due to a couple of delays on course this morning the U14, U16 and U18 elimination rounds have been postponed to later in the week.

Luke Hetzel, Snow Sports NZ Park & Pipe High Performance Athlete Development Manager, explains “The Junior Freestyle Nationals are all about having fun while gaining competition experience, it’s a really important part of our development pathway. It’s a great opportunity for young athletes from all over New Zealand to get together and have a week of competitive fun!”

The competition continues at Cardrona tomorrow (Tuesday 5 October) with the Smith Snowboard Boarder-Cross and the K2 Ski Freeride event. The K2 Snowboard Freeride event that was scheduled to be held today, has been rescheduled for tomorrow as well. 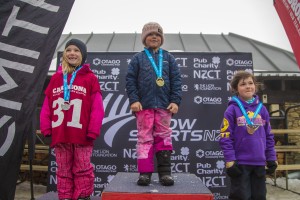