Today was the second day of the Torpedo7 NZ Junior Freestyle Nationals.  We set out to hold the Smith Boarder-cross, the K2 Ski Big Mountain and Snowboard Freeride competitions, along with the Smith Skier-cross that had been postponed from yesterday.

We were initially greeted with blue skies at Cardrona this morning, but a change in wind direction to the North East resulted in the pesky cloud coming back in and hampering visibility for both the athletes and judges at the Big Mountain and Freeride venue, Tulips.

Thanks to their perseverance and great attitudes the U8 Girls and U8 Boys Ski Big Mountain divisions managed to all complete their run and both podiums were awarded today. The remaining ski divisions and all the snowboard divisions have been postponed due to the poor visibility.

Tatum Ball, winner of the Girls U8 K2 Ski Big Mountain competition, has been having a really fun week at the Junior Freestyle Nationals said her favourite part of her day was doing big drops!

With the cloud rolling in and out in the main basin we were able to successfully hold the full Smith Boarder-cross programme, along with completing the U14, U16 and U18 Skier-cross divisions postponed from yesterday.

Joshua Li, winner of the U14 Boys boarder-cross explained “It was really good day, I ended up coming first, I have never won before! My favourite part of the day was hanging out with all my friends and riding with them.”

Lucas Ball took the win in the largest division of the day, the U14 Boys skier-cross. “My favourite part of the day was competing against my friends. I am competing in all the events at the Junior Freestyle Nationals and I am looking forward to halfpipe tomorrow, it will be fun.”

The competition continues at Cardrona tomorrow (Wednesday 6 October) with the Salomon Ski and Snowboard Halfpipe events. The K2 Snowboard Freeride and Ski Big Mountain competitions that were scheduled to be held today, will be rescheduled.

A huge thanks to the efforts from all involved today, especially the Cardrona Alpine Resort events team.

The Cardrona Snow Sports NZ Junior  Freestyle  Nationals run from the 4th to the 8th of October 2021. 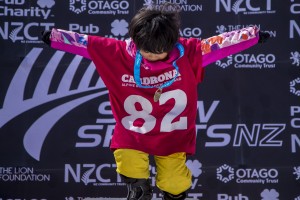