The final day of the Cardrona Snow Sports NZ Freestyle Junior Nationals went down on the Salomon Slopestyle courses today at Cardrona. It was the third and final chance for the athletes to battle it out for the overall national titles. After a tough day of weather holds and an eventual postponement yesterday, the athletes were ready to go.

Olivia Hein, winner of the U12 Girls Ski division, had a fantastic run on the Little Bucks course, which included a left 540 to a switch left 360 combination on the jumps and a 270 degree rotation out of the second rail feature.

“My favourite part of the day was getting to ski with my friends and getting to do a 540 in my first ever competition”.

Over on the Stag Lane and Antlers Alley course Luke Harrold (U14 Boys Ski division winner) had a blinder of a day, scoring the highest awarded ski score on this course. Head Freeski Judge Tori Beattie explained that “his run was a standout; his run would have held up in all of the categories above him as well”.

Tori was impressed with the level of rail riding from the girls and the variety of 540 spins they performed on the jumps. Mischa Thomas, winner of the U14 Girls Ski division, "had a really clean run, locking onto the rails and executing a 540 on the jumps".

Local Wanaka siblings, Lucia and Oscar Georgalli both won their respective divisions today on the Stag Lane and Antlers Alley course. Head Snowboard Judge Keith Stubbs explained how “Lucia was the standout snowboarder today; her run was legit. Her second run really stepped it up with a switch back 360 to a cab 540 to back 540 on the jumps. Back to back 540’s for the U14 Girls division is a big deal”.

“I am so happy just to put down a run” explained Lucia. Older brother Oscar made sure he stood out in a very evenly matched division (the U16 Boys Snowboard). “On the rails I think it’s really good to have a creative run, so I put together a run that I didn’t think other athletes would be doing”.

Both siblings agreed that having each other at competitions is an advantage as they always support each other and hype each other up.

The NZ Junior Nationals have been running for over a decade. As well as being a fun competition to finish off the season, they are an important stepping stone on the competitive pathway for Kiwi snow sports athletes. 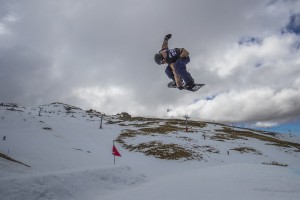