The overall winners of the Cardrona NZ 2014 Freeski & Snowboard Junior National Championships were presented with their awards at a prize giving ceremony at the Lake Wanaka Centre this afternoon (Friday 3 October).

The 2014 event saw over 200 skiers and snowboarders between the ages of five and 18 compete in a range of disciplines including dual giant slalom, ski and boarder cross, freeride, halfpipe and slopestyle at Cardrona Alpine Resort.

Snow Sports NZ’s Adam Dooney thanked the sponsors of the 2014 Junior Nationals without whom the week’s events would not have been possible. He also thanked the events crew at Cardrona Alpine Resort for their hard work hard behind the scenes.

Attendees of the Junior Nationals prize giving ceremony also had the opportunity to win spot prizes including skis and snowboards.

The prize giving ceremony closed with a video of the week’s competition.

Video highlights are available to view on Vimeo. 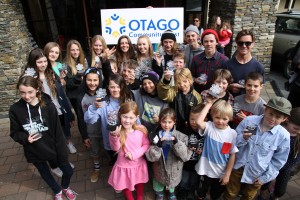