The 2013 IPC Alpine Skiing World Championships were opened in the Sports Centre of Alp, a small village near La Molina, Spain, on Tuesday (19 February).

From 20-27 February, 118 skiers from 29 countries will battle it out for gold in six events. With just over a year to go before the next Paralympic Winter Games in Sochi, Russia, the competition will be a key indicator of form.

Live results, daily news stories and video highlights, as well as athlete video blogs will be uploaded to www.ipcalpineskiingworlds.organd fans can follow the action on Twitter @IPCAlpine and Facebook www.facebook.com/IPCAlpineSkiing.

IPC President Sir Philip Craven said: "Since the 2011 World Championships in Sestriere a number of great rivalries have developed on the alpine skiing circuit and I expect these to take centre stage here this week."

"I'm also delighted at some of the new young talent emerging and believe some of them will be surprise-packages here in La Molina by coming out of nowhere to win a medal or even a world title.

"Such competition for medals and rankings is great news for the sport and I expect the performance levels of athletes to reach new heights at these Championships."

The World Championships is the last major event before the Sochi 2014 Paralympic Winter Games.

Starting with the downhill on Wednesday (20 February) speed queen Alana Nichols of the USA will hope to retain her title in the women's sitting category. Her top rival will be Austria's Claudia Loesch, whilst Germany's Anna Schaffelhuber will be the one to beat in the technical events.

However, Nichols, who competed in the USA wheelchair basketball team in London, feels that she has been playing catch-up against some of her rivals.

"After London I took some time off," she said. "I knew that coming back into the winter season and preparing for ski-racing, I was going to be a little bit behind, but I feel that I'm pretty well caught-up now and feeling good about how I'm racing."

The competition will continue with the super-G on Thursday (21 February) which will likely see arch-rivals Andrea Rothfuss of Germany and Marie Bochet of France battle it out for first place.

"I want to get good results," said Bochet. "Because Sochi is only one year away and I want to arrive there in good condition."

"Andrea Rothfuss is my toughest competitor - she has the same technical abilities as me."

The men's slalom standing will be the race to watch out for on Saturday (23 February) and Monday (25 February) as defending world champion Vincent Gauthier-Manuel of France battles it out with Russia's Alexandr Alyabyev, Australia's Mitch Gourley,  Austria's Matthias Lanzinger and New Zealand's Adam Hall. Expect them to finish within fractions of a second of each other.

"For me this is the most important competition of the season, because it's the World Championship. It's most important for me to have one gold medal," said Gauthier-Manuel.

Another close competition will likely be in the men's slalom sitting category, where Japan's Takeshi Suzuki will hope to hold his ground ahead of German and Austrian skiers.

Slovakia's Jakub Krako will look to win a third World Championship title in the slalom, but Canada's Chris Williamson, Slovakia's Miroslav Haraus, not to mention the home-favourite Jon Santacana Maiztegui will all be pushing hard to take his title.

The competition concludes on Wednesday (27 February) with the team event. 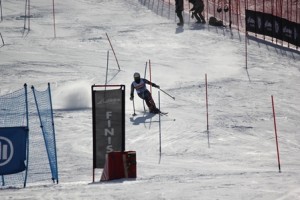