The competition was originally scheduled to take place earlier in the week but had to be postponed due to high winds. Today’s weather was far from perfect with rain and flat light, but good enough to allow each skier to complete two judged runs.

Nico Porteous nailed the Shredder boys’ category, sliding the top rail with a back 2 out, followed by a 270 on to the second rail feature. From there he slid the cannon with a little shifty thrown in, followed by a cleanly-landed right cork 7 and left 9 safety to finish.

Olivia Jones finished off her successful week with a win in Junior girls’ slopestyle.

The standard of competition in Youth boys was impressive, Jackson Wells emerging as the winner ahead of Finn Bilous in second and Miguel Porteous in third. For his winning run Jackson slid the elbow rail, with a front 4 out, followed by a back 2. He took care of the rainbow rail with a blunt side with truck driver grab, following up with a right 7 safety, left 9 tail and left 7 double Japan.

Natasha Drury was the only girl competing in the Juniors and although assured of a win, still decided to give it her all by attempting a couple of backflips.

Beau-James Wells won Junior boys hands down, displaying “style that outshone everyone else”, according to Head Judge, Dion Newport. Beau’s run featured a 270 onto the elbow rail and back 2 off, a 450 onto the down rail, switch onto the cannon and 270 out with a mute grab, switch left dub 9 with a safety, right 9 tail grab and, for the finale, a huge switch left dub 10 safety.

The Junior Nationals is a long-running competition which, every year, attracts entries from all over New Zealand as well as internationally. The 2013 event has seen over 200 skiers and snowboarders between the ages of five and 18 compete in a range of disciplines including dual giant slalom, ski and boarder cross, big mountain, halfpipe and slopestyle. 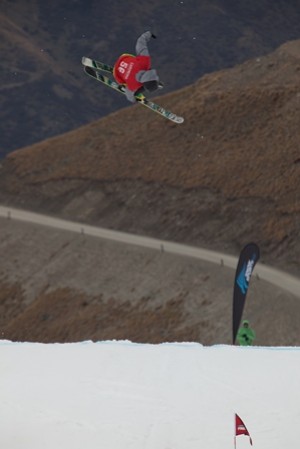