Day Two of the 2012 Snow Sports NZ Junior Freeski & Snowboard National Championship saw competitors enjoying blue skies and spring snow conditions. The keen boarders and skiers are aged from 5 to 18 years and include some of the country’s most outstanding young snow sports athletes.

Today it was the turn of the snowboarders to go head to head in the Calci Yum Dual Giant Slalom. The young speedsters put on an impressive display of technical ability and the podium spots were hotly contested within each age group.

A challenging course tested riders in the Salomon Snowboard-cross making for some exciting head-to-head racing. After a hard fought battle Matthew Thomas came out with top honours for Junior Boys with Tim Herbert once again featuring on the podium, this time in second, and Max Thidling in third.

The Junior Girls also put together some tight racing with Charlotte Jolly the eventual victor, Sian Moore in second and Dakota Craig rounding out the podium in third.

Today it was the turn of the skiers to wow judges in picture perfect conditions. Credit must go to the Cardrona Park Crew for once again putting together a fantastic slopestyle course.

The K2 Ski Slopestyle was an eagerly anticipated event with judges and spectators alike keen to see who could go up against international heavy-hitters Beau-James and Jackson Wells. The crowds were not to be disappointed with Head Judge, Tori Beattie, enthusing that today's event saw “by far the highest standards ever at Junior Nationals.”

This was the first year the Ski Slopestyle has seen doubles at Junior Nationals but not just by one competitor; three skiers tried out the trick. Beau-James Wells and Thomas Waddell successfully landed doubles with Rapley also attempting it but crashing. Judges were also impressed to see spins both ways, lots of style and grabs.

Unsurprisingly, Beau-James Wells took out the top podium position in Junior Males, impressing judges with his unique rail tricks and his ability to use features in a way no other competitor could. From his first jump he pulled off a nose butter 720 to a right cork nine followed by a switch double nine.

Head Judge, Tori Beattie, also commented that standards in the Rippers and Shredders age categories were at the highest level ever seen. Finn Bilous in particular was identified as a promising young talent in the Shredders category.

Similarly, Marc Walker, Head Judge for the youngest age categories, Ruggies, Grommets and Ripper Girls, was impressed to see competitors attempting 360s and 540s. Huck Harrington stamped his mark on the competition with a 540 to switch 180. While in the Girls' field Maggie Little once again showed her talent and earned herself first place for Ripper Girls with Fiona Murray a very close second.

Click here for full results from the K2 Ski Slopestyle.

Snowboarders in the 5-7 years, 8-9 years and Girls’ 10-11 years age categories had an opportunity to showcase their talent in the Smith Snowboard Slopestyle competition which had to be postponed yesterday after an overnight snowfall flattened the course.

The wait was particularly worth it for Valentino Guseli whose frontside 180 followed by switch 180 earned him first place in Ruggies Boys.

The Junior Nationals are scheduled to run over four days from Monday 1 October to Thursday 4 October. The action continues tomorrow with the Salomon Ski Halfpipe and K2 Snowboard Free-ride. 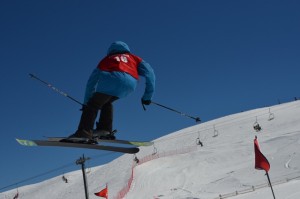