A fun day was had by all in the Bonfire Snowboard Halfpipe competition and judges commented on the exceptionally high standards of riding. Head Judge, Mike Hygemann, said he was “really impressed with the level of riding throughout the whole competition.”

Hygemann particularly admired the gutsy riding demonstrated by the youngest competitors who gave it their all despite the fact that “the top of the pipe was five to six times taller than them!”

Valentino Guseli was once again a standard out performer in the Ruggies Boys’ division, his winning run including frontside and backside indy, a front 3 and a switch 5 ally-oop, “which is amazing for a little kid,” said Hygemann.

Judges had no doubt that Junior rider Hamish Bagley was “by far the best competitor in today’s competition”. Bagley demonstrated “great amplitude” and was awarded a near perfect score of 9.8 out of a possible 10 by one judge. His winning run included a backside 540 into frontside nine to backside tail grab, frontside 700 to cab 7, with an ally-oop to finish.

Click here for full results from the Bonfire Snowboard Halfpipe

Firm snow conditions made for a challenging day of competition in the K2 Ski Big Mountain competition. Nonetheless the strong field was clearly up for the challenge and produced lots of tricks and strong, fast skiing.

The event is judged on technique, control, fluidity and difficulty of line and judges were on the lookout for fast fall line skiing and big, controlled airs. They were not to be disappointed, with competitors in every age group demonstrating the aggressive technique which is at the heart of this discipline.

With such high standards across the board, Head Judge, Tori Beattie, commented that in order to earn a place on the podium entrants also needed to create the wow factor by pulling a few tricks en-route. Beattie is convinced that “this is the future direction of Big Mountain skiing and this is being driven by this group of kids.”

A stand out example of this was 13 year old Miguel Porteous who pulled off a double stage cliff into a “ginormous” cork 7 and executed a perfect landing. Keeping it in the family, 11 year old Nico Porteous then pulled out a backflip to win the Ripper Boys’ category.

Ryan Read was winner of the Junior Boys' category with judges remarking that he showed “surprisingly strong and aggressive ski technique for someone more known for park skiing”. He just edged out Beau-James Wells who demonstrated stylish grabs and also showed how strong park skills can be transferred to Big Mountain.

Amongst female competitors Maggie Little once again stood out in the Ripper Girls’ class which was the biggest girls’ division of the day.

Polly Brownlee took out the Junior Girls’ title with her second run thanks to her decision to take on the steeper, more exposed terrain.

Tomorrow will see the final day of competition for the 2012 Snow Sports NZ Junior Freeski & Snowboard Championship. Competitors will take on the Salomon Ski Halfpipe and K2 Snowboard Free-ride.

Thanks to the crew at Cardrona Alpine Resort and to all our fantastic sponsors! 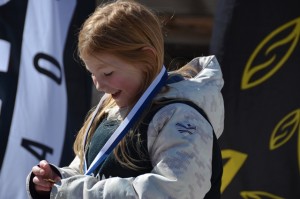