Monday (19 August) marks 200 days to go before the opening ceremony of the 2014 Winter Paralympic Games in Sochi, Russia and New Zealand athletes are training hard to gain an early advantage as their competitive season begins during the Audi quattro Winter Games NZ 2013.

Adam Hall and Carl Murphy are two members of the Adaptive Snowsports New Zealand team hoping to qualify for Sochi 2014. Both men are now resident in Wanaka after spending their early lives in Mosgiel and New Plymouth respectively. Hall is the reigning Paralympic Winter Olympic gold medallist in adaptive slalom while adaptive snowboard-cross racer Murphy, for whom Sochi will hopefully be his first Paralympics, finished the northern hemisphere season ranked number one in the world and took bronze at a World Cup race in March which doubled as a test event for the Sochi Games.

Adam Hall competes in back-to-back IPC Alpine Slalom World Cups at Coronet Peak near Queenstown next week during Winter Games NZ. He said having a World Cup on ‘home snow’ is a fantastic opportunity to build for Sochi where he plans to compete in both slalom and super-combined events.

“It has attracted a lot of world class athletes and, with only 200 days to Sochi, it’s the perfect opportunity for me to measure where I’m at compared to the rest of the field. As a Paralympic medallist you naturally want to defend your title. The goal this time around is to be a bit greedier and to come home with more than one medal.”

Adam leaves New Zealand in November to head back to his base in Winter Park, Colorado. He has a few US races and two IPC World Cups in Panorama and Copper Mountain before heading to a holding camp in Switzerland for acclimatisation and final ‘touch ups’ before heading to Sochi.

"New Zealand athletes are working hard to prepare. To attract high calibre events such as the IPC Alpine Skiing World Cups to New Zealand during Winter Games NZ is invaluable. These events will provide the opportunity for New Zealand disabled athletes, including our Vancouver 2010 Paralympic Games Gold Medallist Adam Hall to compete on home territory against the best in the world," she said.

In 2009, Carl Murphy was the first adaptive snowboarder to be named in the NZ Snowboard National Team. His sport of snowboard-cross, in which riders race against each other down a banked course with start gates and jumps, is not represented at Winter Games NZ but he remains focused on his Paralympic goals.

“I’m concentrating on my training – the technical details and fundamental skills to make sure everything falls into place ahead of Sochi. Not having any competitions during the northern hemisphere season is actually an advantage because there’s no stress. Rather than building up to different events I can concentrate purely on my training and my goal to podium in Sochi,” he said.

The Audi quattro Winter Games NZ 2013 takes place over 11 days from 15-25 August at the international resorts of Coronet Peak, Cardrona Alpine Resort and Snow Farm, along with the Maniototo Curling International Rink. Set against the spectacular backdrop of New Zealand’s Southern Alps, the Games also include a full Downtown Sessions festival programme featuring films, live music and entertainment in Queenstown and Lake Wanaka. 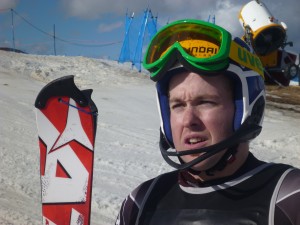